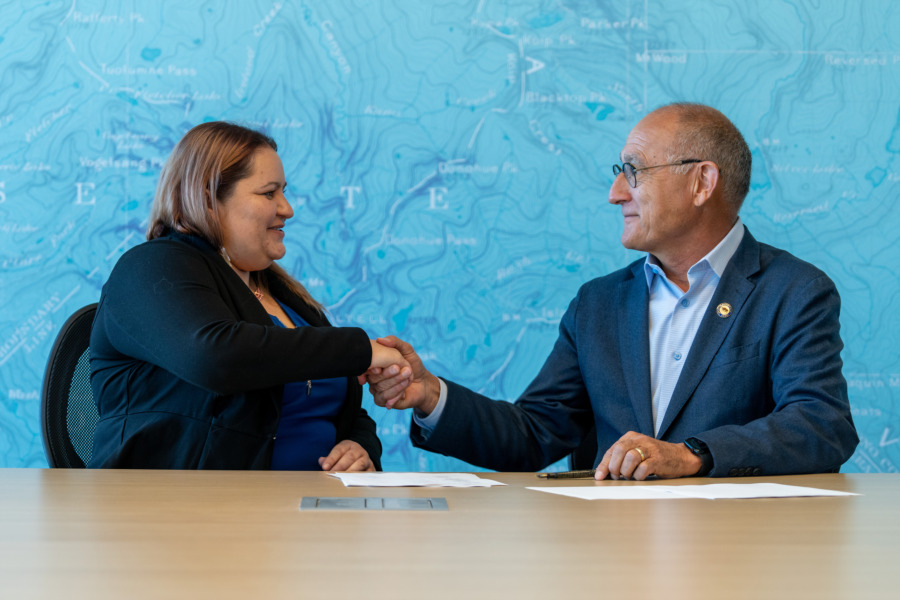 [Yesterday,] the Yurok Tribe and California State Parks have signed a far-reaching agreement to facilitate the cooperative management, conservation, and interpretation of traditional and natural resources on state park lands in the Yurok’s ancestral territory

Following the historic Global Memorandum of Understanding and the Traditional Tribal Gathering Agreement, citizens of the Yurok Tribe with Tribal ID cards can now access state parks inside the District of North Shore Redwoods and Yurok Ancestral Territory for:

In addition, the agreement aims to reintegrate the traditional ecological knowledge of the Yurok Tribe into the management of the parks’ natural resources.

“I want to thank California State Parks Superintendent Armando Quintero and North Coast Redwoods District Superintendent Victor Bjelajac for taking action to right this long-standing injustice. We would also like to thank Sabine Talaugon, the Tribal Affairs Program Manager who worked closely with our staff on the final Memorandum of Understanding. The agreement ensures that our traditions and culture, as well as our traditional ecological knowledge, will continue to be passed down from one generation to the next,” said Joseph L. James, the Yurok Tribe Chairman. “The reintegration of tribal land management practices is critical to the long-term health of the redwood forest ecosystem.”

“State Parks is honored to build on our relationship with the Yurok Tribe for collaborative management and shared stewardship,” said California State Parks Director Armando Quintero. “When the Yurok Tribe and other Native American tribal nations in California are able to access their ancestral lands and continue their cultural traditions and practices, all Californians will inevitably benefit.”

“The agreement represents truth and healing in action,” said Yurok Vice President Frankie Myers, who is an appointed member of the Truth and Healing Council of California.

The deal wouldn’t be possible without California Governor Gavin Newsom’s Executive Order N-15-19, which recognized the state’s “prejudicial policies against California Native Americans.” The paradigm shift order also included a promise to strengthen government-to-government relations between the state and the tribes. Following the commission, the Yurok Tribe and California’s North Coast Redwoods District State Parks have partnered on more than a dozen projects with more on the way. Through this unprecedented partnership, the Tribe now operates the Chah-pekw O’Ket’-toh “Stone Lagoon” Visitor Center, which is the only Tribe-run visitor center in the entire system. California state parks. District Superintendent Victor Bjelajac played a key role in the tribe’s efforts to restore the name of Sue-meg State Park. The tribe and the district are also collaborating on watershed restoration work.

The global MoU outlines mutually beneficial activities that will be the focus of future agreements, including plant habitat management, biological site monitoring and collaborative management practices in the Humboldt Lagoons and Nature Parks. State of Sue-meg.

The story of the mystery | Columns