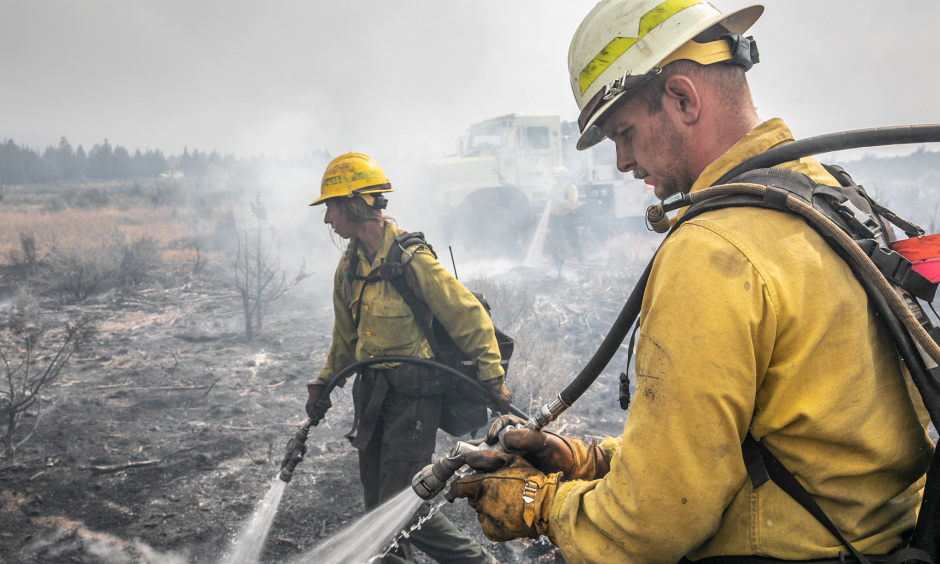 US House adopts major program to fight wildfires and drought

The U.S. House of Representatives on Friday approved, 218-199, a huge package of bills to address the growing threat of wildfires and drought in the West.

The measure includes 49 stand-alone bills from Democrats and Republicans. It includes provisions to make permanent a pay increase for wildland firefighters, lift the cap on the federal cost share for fire recovery funding, and authorize more than $1.5 billion for infrastructure. hydraulics to help manage drought conditions.

Republicans said the spending would not significantly improve fire prevention and called for allowing more logging to thin forests.

There were 217 Democrats who voted in favor of the bill and one Republican. One Democrat was opposed and 198 Republicans.

The future of the package is unclear. The White House issued a statement that did not gain full support, and members of the Senate did not indicate they would pass the legislation.

Colorado Democrat Joe Neguse, chairman of a House subcommittee on public lands and forestry, sponsored the omnibus measure and led a debate on the floor Friday.

In the past two years, three catastrophic wildfires have devastated parts of the Boulder District of Neguse, he told the House on Friday. Responding to such events now takes up much of his time and other congressional offices.

“We have a duty to provide our constituents with the support they need to rebuild and recover,” Neguse said. “The reality is that we are living with a new normal as climate change drives a hotter, drier planet where historic drought and record wildfires are not just a possibility, but a foregone conclusion.”

Wildfires have also devastated New Mexico this year, with the Forest Service responsible for the largest wildfire in the state’s recorded history.

Neguse pointed to the firefighter compensation measure, which would indefinitely extend an increase to a $20-an-hour minimum enacted in last year’s bipartisan $1.2 trillion infrastructure law. Without congressional action, the increase would expire at the end of September 2023.

The package also includes a Neguse bill to allow the Federal Emergency Management Agency to lift the cap on the federal share of fire assistance grants. The cap is currently 75%, but the bill would ask FEMA to determine the circumstances in which the federal share could be higher.

The measure would ratify a 10-year plan for the US Forest Service, authorizing $1.5 billion a year for the next decade for fire-related programs. It would also authorize spending for large-scale forestry projects that the administration has already identified.

These projects include the Four Forest Restoration Initiative, known as 4FRI, and Greater Prescott Area Wildlife Protection and Restoration in Arizona, the Colorado Front Range, southwestern Idaho, the Kootenai Complex in Montana, the Enchanted Circle in New Mexico and central Oregon.

The bill would authorize an additional $700 million for a water recycling project created in the Infrastructure Act.

New Mexico Democrat Melanie Stansbury has sponsored three water bills, including bills authorizing $500 million to help prevent reservoirs in the Colorado River Basin from declining to critical levels and to establish a management plan for the Rio Grande basin.

“We need to pass this legislation so our communities have the tools and resources they need to stay resilient,” Stansbury said.

The package would also establish a National Disaster Safety Council to collect data on natural disasters and provide recommendations to prevent future loss of life. It would create another council to study the impacts of wildfires and the effects of climate change on fires.

The Biden administration offered qualified support for the bill’s passage through the House in a July 26 statement from the Office of Management and Budget.

“The Administration appreciates Congress’ interest in the Administration’s efforts to address climate change and its effects on wildfires and drought,” the statement said. “The administration wishes to work with Congress to ensure that the law’s many provisions avoid duplication of existing authorities and administration efforts.”

Republicans raised a host of objections to the bill, including that it failed to significantly update federal forest management practices to allow for more logging and that they were barred from input at the committee level.

Logging helps prevent forests from being taken over by brush that can make fires more intense and spread faster, they said.

“Surplus timber will always come out of the forest,” said U.S. Representative Tom McClintock, a Republican from California. “Either we will realize it, or nature will burn it. When we achieved this through logging, we enjoyed healthy forests and a thriving economy…Our forests are now morbidly overgrown and nature is burning off the surplus again.

“This bill does nothing to reform laws that have made active forest management impossible, and instead leaves us in a losing battle.”

House Natural Resources-listed Republican Bruce Westerman of Arkansas also said one of the bill’s most central features — increasing firefighter pay — was more style than substance, because it would only prolong a current policy. Because the Infrastructure Act already sets firefighters’ wages at $20 an hour, Friday’s bill did nothing, he said.

“You should never confuse motion with action, which is exactly what the bill before us today does,” he told the House. “This bill is over 550 pages and does absolutely nothing to prevent wildfires or significantly improve our drought resistance.”

Neguse took issue with Westerman’s description, noting that the salary increase in the infrastructure bill was due to expire next year. The House bill would make the increase permanent.

Additionally, Westerman said the U.S. Forest Service told committee Republicans that without additional funding, the pay increase would require the layoff of hundreds of firefighters.

“Some say it’s a licensing bill,” Hoyer said. “It’s an authorization bill. It’s a regular order. It will therefore be our responsibility to appropriate the funds necessary to achieve the objectives of this bill, and I hope that we can do so in a bipartisan manner.

The Senate has not scheduled any review of the measure.

A spokesman for the Senate Energy and Natural Resources Committee, which would have jurisdiction over most of the package, declined to comment on Friday.