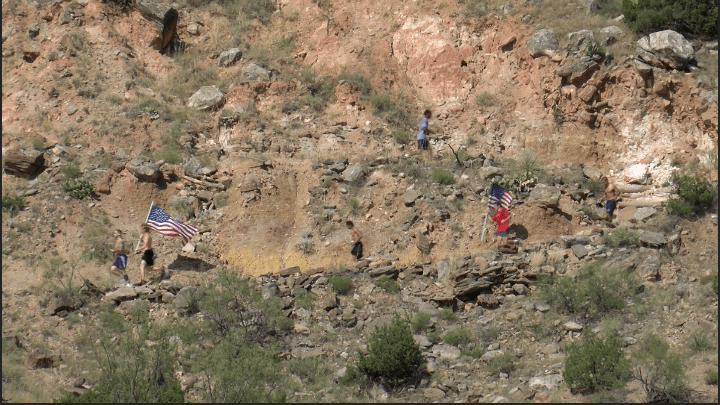 The Flag Run is a fun, challenging team race dedicated to veterans past and present.

“Six Marines planted the flag on Iwo Jima, where we lost over 7,000 Marines, and 7,000 Marines were killed at Iwo Jima. So we recognize this battle and my dad who was a survivor of Iwo Jima, but we really do recognize all of the military, with a special focus on the 13 we just lost recently, ”said Johnny Cobb, Iwo Founder Jima Flag Run.

The event began on Saturday with a minute’s silence for the 13 members of the armed forces recently lost in Afghanistan.

Cobb said the idea came to him as a way to honor his father, who served Iwo Jima.

“As soon as they bombed Pearl Harbor, he went to enlist. He joined the Marine Corps and went through the bloodiest battle in Marine Corps history, traveling to Iwo Jima, and then had to occupy Japan after dropping the atomic bombs. He joined the marine reserves, just finished it all and started a business with my mom, and then he’s called back to Korea. So he made quite a trip, and it turned out that part of the radiation exposure he suffered during the occupation in Japan killed him a little later, when I was 13. years, ”said Cobb.

Cobb added that this Flag Run is not an easy task as it is supposed to simulate Mount Suribachi.

All proceeds from Saturday’s event will go to our Brother-Sisters of Our Military Adventures, which help local veterans, first responders and Gold Star families.

When the teams completed the course, they received a jersey, a Palo Duro Canyon Iwo Jima challenge piece, and Schlotzsky’s sandwiches.