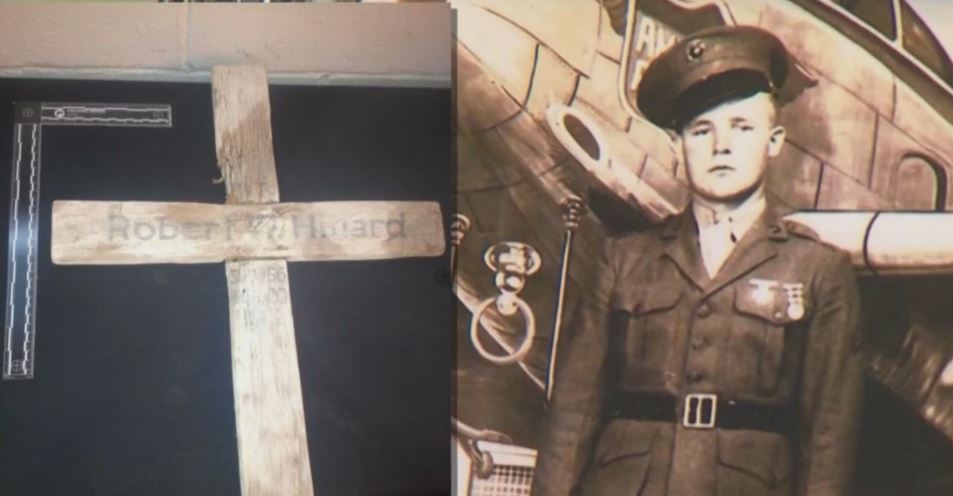 The remains of the Arkansas Navy lost in WWII are still missing, but the symbol of her faith returns to the United States

BIG FORK, Ark. –Arkansas native soldier Robert Hillard was a Marine and just a teenager when he was killed in WWII. His remains have still not returned.

Hillard was featured in a previous story KARK made in July, but a recent discovery is now putting his name in the national spotlight.

A piece of history has been unearthed, and now a boy’s story from Big Fork, Arkansas will be shared with millions of people.

Susan Hillard was on vacation with her family in Greece when KARK sent her incredible news.

The cross belonging to his uncle, Pvt. Robert Hillard was discovered on the WWII battlefield where he died almost 100 years ago.

Pvt. Hillard was killed at the Battle of Tarawa in 1943. His body was left in a rushed grave and his remains have been lost in history ever since.

His cross was found by History Flight, a nonprofit organization that works hard to bring these missing Marines home.

“It’s something tangible that we haven’t had,” said Susan.

Now Pvt. Hillard’s cross, photo and story are on display at the National Museum of the Marine Corps near Washington, DC

“It’s pretty cool that a boy from Big Fork gets a little bit of attention,” said Susan.

But more than that, Susan thinks her grandmother, Robert’s mother, is smiling.

“It’s the big thing,” said Susan. “I would like us to find him and for everything to happen for her.” I think she would be sad, but proud.

Susan said she was grateful to History Flight for working hard in less than comfortable conditions.

“It’s hot and it’s heavy and it’s wet and mean and they do it because they care and that’s something,” Susan said.

And the dream that accompanies it too.

“I think we are all really hoping that he will be found now,” she said.

The service and sacrifice of an Arkansas boy… still talked about almost 100 years later.

Pvt. Hillard’s family plan to visit the museum soon to do what Susan says is “see the exhibit, touch it and claim it”.