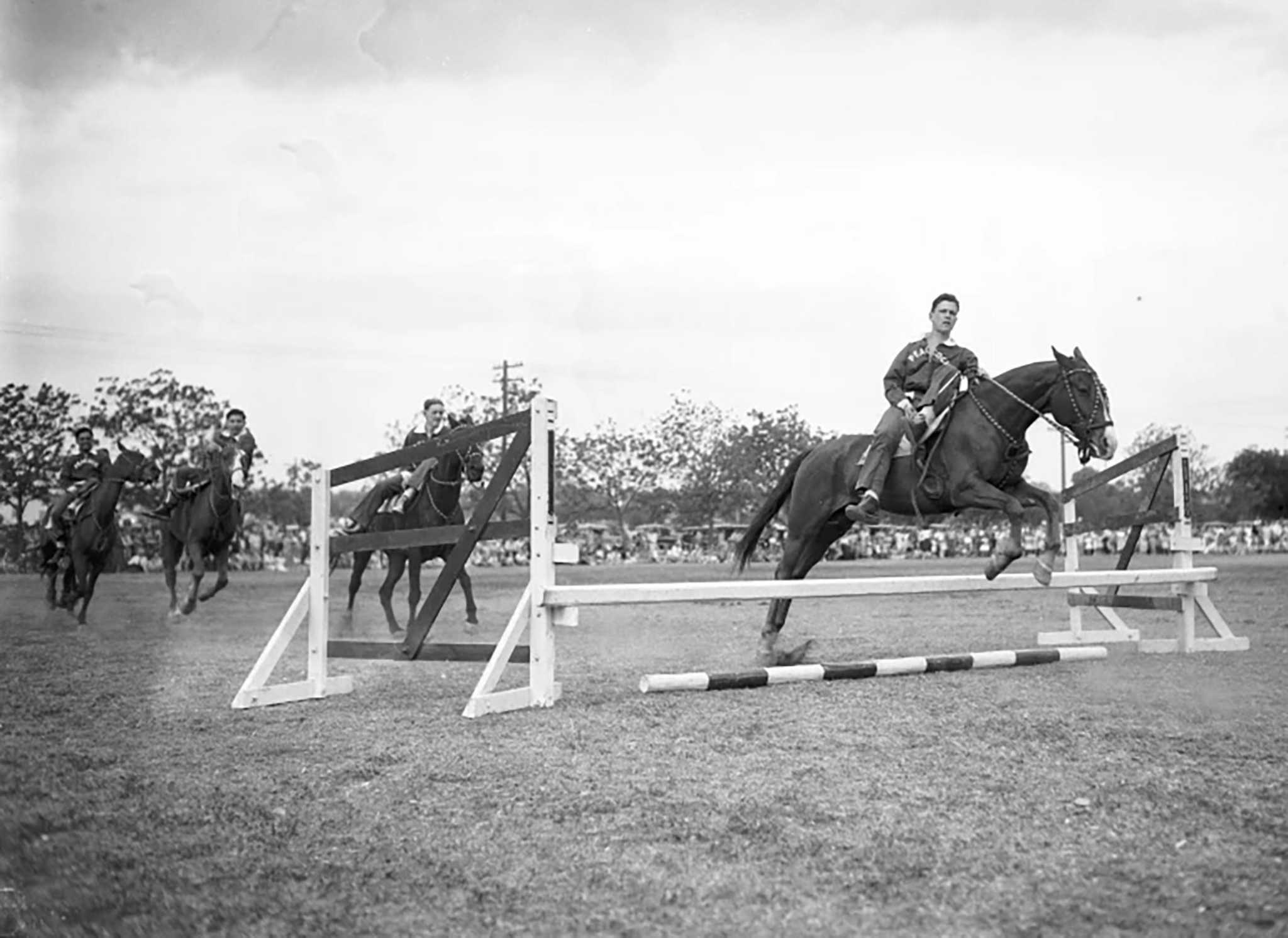 Last Sunday’s column began an answer to John Moore Jr.’s questions about the Peacock Military Academy, or PMA, a now-defunct private school with a long and idiosyncratic history. His father, then captain. John Moore Sr., taught Spanish and was one of the military instructors at the school, founded in 1894 in what is now the Woodlawn area. Still an all-boys school, it followed a post-Spanish-American War trend and became military in 1900, which meant training that for some went beyond marching.

Originally a private school, owned and operated by founder Wesley Peacock Sr. and his family, the small school (capped at 200 students) remained proudly… different, long after the eldest Peacock retired in 1926 in favor of his sons, Wesley Jr. . and Don, and a move to non-profit status in 1933.

Reader Moore, a young child when his father worked there in the early to mid-1950s, remembered elite units of particularly accomplished students – the Monkey Drill Team, an acrobatic equestrian group inspired by cavalry teams of the military, known to roll while standing. ; and the fast-paced, close-order Zouaves, descended from a tradition of the Elks Club through the French and other armies, who wowed audiences by scaling a 12-foot wall in less than a minute. Both, along with the base PMA cadets, were reliable and popular participants in Fiesta San Antonio parades and other events.

In addition to the school’s history — the early decades were covered here last week — Moore asked about the Peacock family.

Paula Allen on PMA: The Peacock Military Academy in San Antonio marched to the beat of its own drum

For several years during the 1930s, print advertisements for the academy featured profile pictures of three Peacocks – Founder and “President Emeritus” Wesley Sr., Superintendent (Chief) Wesley Jr., and Commandant (Chief of the military program) Don, subtitled “The Peacock Triumvirate”, recalling the Roman political institution of three men closely linked to power. (A fourth peacock, not male and not pictured, was also an integral part of the staff.) The following on each of these figures is from newspaper articles, public records, “Parade Rest” Volumes 1 and 2, and correspondence with books. author, Don’s daughter, Donna Peacock, who answered a few questions after consulting with her sisters but asked not to be directly quoted.

As reported here last week, Wesley Sr. (1865-1941), a graduate of the University of Georgia, already had teaching experience in Texas (Jasper and Uvalde) before moving in 1893 with his first wife, Seline, and his toddler Wesley Jr. in San Antonio, where at age 29 he founded the Peacock School for Boys. In the beginning, the school taught all ages and all subjects. Wesley managed to acquire land and begin building in the West End (now Woodlawn) area served by streetcars; the school’s registration address would be 1800 Cincinnati Ave.

Seline, a Texan from Jackson County, died Nov. 28, 1898. Her obituary the next day in the San Antonio Light said she died at home and left “two little children” – little Wesley and another who must not have survived.

About five years later, “Professor Peacock,” as Wesley Sr. was called, remarried; with the former Edith Wing he had three more children – Donaldson “Don” Wing, Dorothy Wing and Margaret Edith. All but Margaret, who married a career army officer, went into administration at the school, often identified as “family-friendly”.

Edith Wing Peacock, an active clubwoman, was also an accomplished equestrian and was instrumental in the development of the school’s equestrian program.

Wesley Sr. was a committed Methodist who held important lay office in the denomination; he was also an avid outdoorsman who co-founded the Texas Game and Fish Protective Association, a sports organization.

Wesley Jr. (1896-1991) attended the family school, followed by Southwestern University, World War I service as an artillery officer and his courses, and the University of Texas at Austin and Trinity University to complete his degree, helping as a drill instructor at PMA when he could. Along with his brother, Don, he took over administration of the school when their father went into semi-retirement; during World War II, Wesley Jr. served as an Army Liaison Officer with the Texas State Guard Special Staff and received honors for his achievements in the military education of the military, the state of Texas and the city of San Antonio. He served for 47 years as Superintendent of PMA.

Half-brother Don (1906-2001) also went to PMA, then Oglethorpe University in Atlanta. The visionary of the PMA’s elite drill teams had a wealth of military experience to draw upon. According to his Express-News obituary, Nov. 24, 2002, “During World War II he served on the Texas Adjutant General’s Staff (and) was promoted to Colonel in 1948. He served as Chief of Staff of the State Guard from 1948 until his retirement in 1963. He received the Texas Medal of Merit and the Minute Man Award from the Texas National Guard for Meritorious Service (and) was inducted into the National Honor Guard in 1981.”

The other long-serving family administrator was Dorothy Wing Peacock (1910-1991), whose job has been described over the years as “secretary”, “accountant”, and finally “financial officer”. School catalogs from the early 1960s use the latter of these titles. A brief biography indicates that she attended Westmoorland College (a Methodist school formerly known as San Antonio Female College, discussed here October 10, 2013) and the University of Texas. As a student, she coached basketball at the Ursuline Academy. After years as a school finance professional, she also earned a library science degree from Our Lady of the Lake University and served as the school librarian at times. During World War II, she was a senior officer in the local Women’s Red Cross Motor Corps unit, for which she supervised civil defense exercises; later, she was active in the local club Zonta International for female executives. She died a month before Wesley Jr.; neither I nor Donna Peacock could find him an obituary.

The second-generation Peacocks had a long life, perhaps because they knew when to stop working. For them, that meant more than filing retirement papers. From 1966 to 1978, including years of infighting during the Vietnam War, 73 military schools “closed or transitioned to a non-military format,” said John A. Coulter, author of “Cadets on Campus: History of Military Schools in the United States,” citing changes in culture, including a trend toward coeducation.

Wesley Peacock Jr. announced the school’s intention to close in a letter to parents sent in March 1973.

The final graduation ceremonies were held on May 26, 1973, also the last day of school. The letter and subsequent newspaper interviews highlighted the “advanced age…and health conditions” of the superintendent, his brother and sister, and news reports also mentioned the “lack of male heirs”. Wesley Jr. and his wife had no surviving children, according to his Express-News obituary; Don was the father of three daughters (one son, Donaldson Jr., died at birth in 1938); and Dorothy never married.

Since it was already a non-profit organization, why didn’t the Peacock siblings hire their replacements before they retired? Family members say enrollment was already down and Wesley Jr., Don and Dorothy wouldn’t have been comfortable with someone else in charge, though they looked at some options to keep PMA open.

The school band performed at graduation, including a closing “Auld Lang Syne” and a final haunting tap. The campus was passed on to the local Salvation Army, which still refers to the old campus as its Peacock Center.

Despite its seemingly abrupt end, the “little school of the game” – as described by Mamie Eisenhower, wife of his 1915 football coach – had a storied history, including several other members of the Peacock family who worked there over the years. early decades and a few satellite campuses. , including one in Dallas and a Peacock Naval Academy in Corpus Christi.

“Thousands of young men from the United States, Mexico, Central and South America, and even Europe have graduated in the academy’s nearly 75-year history,” states the obituary. Don’s Express-News, Nov. 24, 2001. “Alumni include Father Virgil Elizondo, former rector of San Fernando Cathedral; late director King Vidor, the Galveston native whose credits include ‘Stella Dallas’ and ‘The Fountainhead”; Paul Calvo, ex-Governor of Guam; character actor Richard Bradford; and the late Albert Alkek, the Houston oilman and philanthropist who donated $30 million to the University’s MD Anderson Cancer Center. of Texas in 1993.

The Peacock Military Academy Alumni Association, a non-profit organization, was founded in 1983 to preserve the school’s history and advance its traditions. The group holds meetings, maintains a mini-museum (covered here September 24, 2006) in the Peacock House on the Old Campus, and awards Peacock Memorial Fellowships, for which it accepts tax-deductible contributions on behalf of deceased individuals for his Honor Roll scholarship. Members also present an annual Peacock Medal to aspiring junior cadets who will become JROTC cadet corps commanders at Marine Military Academy Harlingen, San Antonio Academy, San Marcos Academy, and Texas Military Institute.

The association’s current CEO is Arturo Wolf, PMA ’73. He was the last graduate to cross the stage at the school’s final graduation ceremony. “When he shook hands with Col. Wesley Peacock Jr., neither of them really wanted to let go,” Mike Vlieger ’62 said. “It was a very long and warm handshake.”

To contact the PMA Alumni Association for tours or other enquiries, email [email protected]

Great Lakes Student Loans Review 2022: Is It the Best Option?

Flagler County at the Crossroads: Community or Concrete Jungle?