About 5,300 years ago, an ancient civilization emerged in eastern China, building a brilliant city unlike any previously seen in all of Asia – nor maybe even the whole world.

The surviving traces of the Liangzhu culture, which rose along the banks of the Yangtze River Delta in eastern China, is a testament to what this unique Neolithic society was capable of in the later reaches of the Stone Age.

The Liangzhu city archaeological ruins show many signs of social, cultural and technological advances for the period, particularly in agriculture and aquaculture.

Meanwhile, sophisticated architectural features – including clever hydraulic engineering that enabled canals, dams, and water reservoirs – have led to allusions to Liangzhu as being a Neolithic “Venice of the East”.

None of these wonders will last, however.

Above: Aerial view of the Liangzhu Palace area.

After just one innovative millennium, Liangzhu’s culture mysteriously collapsed around 4,300 years ago, and the ancient city was abruptly abandoned.

Exactly why has never been fully understood, although many have suggested some form of catastrophic flooding led to the sudden decline.

“A thin layer of clay was found on the preserved ruins, indicating a possible link between the disappearance of advanced civilization and the flooding of the Yangtze River or the flooding of the East China Sea,” Explain geologist Christoph Spötl from the University of Innsbruck in Austria.

“However, no clear conclusion on the cause was possible from the mud layer itself.”

Now we have a clearer picture of the flood that drowned this amazing place.

In a new study, Spötl and an international team of researchers went far beyond ancient mud deposits, examining mineral formations (or speleothems) such as the stalagmites of two underwater caves in the region, which preserve the chemical signatures of climatic conditions. from a long time ago. 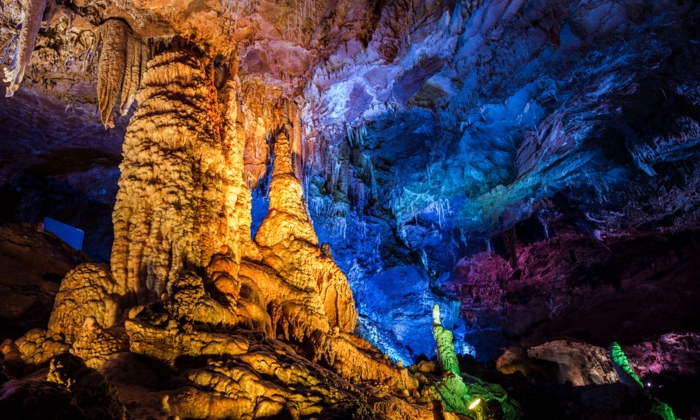 Led by first author Haiwei Zhang of Xi’an Jiaotong University of China, their analysis of stalagmite samples shows that the collapse of Liangzhu city coincided with a period of extremely high rainfall that likely lasted for decades there. more than 4,300 years ago, probably due to the increased frequency of El Niño – Southern Oscillation conditions.

“It’s surprisingly precise in the light of the time dimension”, Spötl says.

“The massive monsoon rains probably caused so severe flooding of the Yangtze and its branches that even the sophisticated dams and canals could no longer withstand these water masses, destroying the town of Liangzhu and forcing people to flee.

According to the researchers, earlier cases of climate change in the Yangtze River Delta region may also have impacted other Neolithic cultures that inhabited the area before Liangzhu society developed in a period of dry environmental conditions and relatively stable.

“Archaeological studies show the presence of large-scale hydraulic complexes such as large earthen dams near the town of Liangzhu, which were built between [5,300 and 4,700 years before present], ” researchers write in their study.

“This suggests that Liangzhu’s company efficiently managed water resources by using water infrastructure for flood mitigation and / or irrigation to survive in a dry climate.”

Over time, however, this dry climate appears to have become progressively drier, culminating in a possible “mega-drought” around 4,400 years ago, when dam construction appears to have ceased, as existing dams would have been sufficient in the region. arid conditions.

And then the rains came, falling in two separate bursting periods about 4,400 to 4,300 years ago.

“Our speleothem records, as well as geochemical evidence of flood deposits above the Liangzhu culture layer, suggest that massive rainfall throughout the lower middle reaches of the Yangtze River Valley may have induced riverine flooding and / or excessive marine flooding carried by the Yangtze River. plume and thus hampered human habitation and rice cultivation ”, the authors explain.

“Massive flooding and flooding due to poor drainage of the lowlands may have forced the people of Liangzhu to abandon their capital and dwellings in the Taihu Plain, ultimately leading to the collapse of the entire Liangzhu civilization.”

For hundreds of years thereafter, humid conditions remained, during which other ancient cultures temporarily rose to succeed Liangzhu – at least, until another mega-drought likely led to the “final death” of the Neolithic human societies of the region.

At around the same time, Chinese society was about to begin a new chapter of transformation, with the founding of the Xia Dynasty in 2070 BCE, considered the first dynasty of China, ruled by Yu the Great.

“While many documents indicate that leader Yu built the Xia Dynasty because he was successful in dealing with the river flooding, some studies suggest that Yu’s flood control can be attributed to climate change.” researchers explain, noting that their own speleothem data also supports the idea.

“This observation provides strong new evidence that the rise of the Xia Dynasty occurred against the backdrop of a major wet-to-dry climate transition, consistent with Chinese historical records and previous studies.”

The results are reported in Scientists progress.