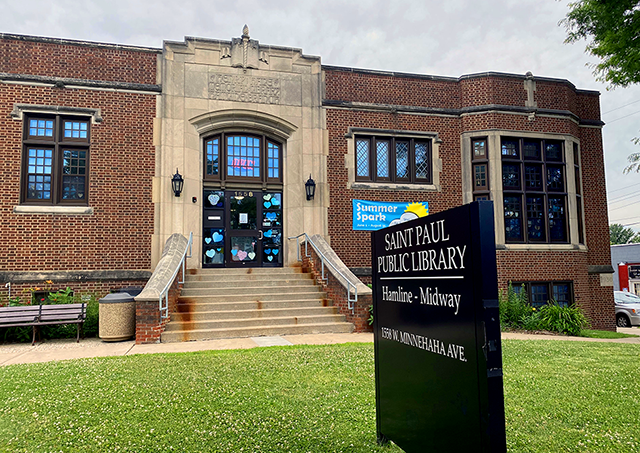 The Hamline-Midway Library needs to change, but does it need to be demolished?

Walking through the doors of the Hamline-Midway Library remains a special moment for St. Paul resident Bonnie Youngquist, who remembers decades of visiting with her family.

â€œWhen you walk into the lobby, look at the facade above the door: it has an interesting feature,â€ says Youngquist, who has collected more than 1,500 signatures on a petition to save the library building. â€œThe Hamline-Midway Library was my favorite. My kids practically grew up in this library, [watching] the Bill the juggler shows. We know it well.

Over the past year, competing groups of library advocates have fought a quiet battle over the future of the small brick building. Advocates like Youngquist have written letters to the editor and started petitions, while other library supporters are pushing forward a plan to replace the building with a larger, newer one. Earlier this month, the city’s investment and budget committee heard testimony about the importance of investing in the library. But at this point, with no firm plans officially on the books, it’s not clear whether to demolish the 90-year-old building.

One point of agreement: it is outdated

Everyone agrees that the quaint building on Minnehaha Avenue, just off a bustling corner of Snelling, may need reinvestment. Compared to the newer and larger libraries in the city, like the Rondo branch located 3 km to the east, the facility looks distinctly outdated. The 1930 building can be described as awesome and has been doing Yeoman’s job for 90 years.

Hence the need for change, as recently testified by members of the community before the committee appointed by the mayor of the city.

â€œI visited the Hamline-Midway branch, volunteered there, raised kids there and saw how many facilities are used in various ways,â€ said Deepa Rathnam Nirmal, who spoke during the public testimony before the city’s CIB committee. Nirmal is a member of the Hamline Midway Library Association, which has been organizing for years to improve their local branch.

“It’s very well liked [but] shows a lot of wear, [and] it just doesn’t meet the needs of the growing community, â€Nirmal said. â€œI think we would do well to have a brand new building just because of the constraints. I’m sure we can incorporate some of the charm of the existing building.

The CIB committee is assessing whether to grant just over $ 8 million to this library as part of a competitive process that pits projects against others in the city. But because the request doesn’t specify what exactly will happen to the building, the Hamline-Midway situation is as vague as anything in local politics.

Uncertainty is not new to Hamline-Midway Library patrons. Like many of the city’s smaller branches, it has been on the verge of a library budget pit for years. In 2009, faced with a shortfall of $ 2.1 million, then-mayor Chris Coleman proposed to shut down the library for good. In response, neighbors pushed back and organized, keeping the branch open.

In fact, the Hamline-Midway branch has had a special connection to community activism since its inception. The only reason it exists today is that neighbors organized during the 1918 flu pandemic to acquire land for the building. One hundred years and one pandemic later, history is repeating itself.

â€œThe story behind the scenes is quite interesting,â€ Youngquist said. â€œDuring the Spanish flu, neighbors raised funds and donated money to buy land for a library building. And much later, during the Depression, the library was built after a protracted trial to access the funds of William Hale’s estate.

As Youngquist describes it, the library’s strange provenance has its roots in a little-known East Coast transplant named Henry Hale (Nathan Hale’s grandson). Hale was a renowned judge and chairman of the library board, and left a provision in his will to build one in St. Paul. Although he died in 1890, the bequest stagnated for decades as his wife and descendants retained control of the estate. The standoff only ended when a group of Hamline-Midway library advocates filed a lawsuit to force construction of the library branch.

Completed in 1930, at the start of the Great Depression, the building lacks the ornamentation of other historic libraries in the city. Yet the building is stately, with windows that resemble an English estate. Above the entrance, an inscription is carved in stone under a frieze of an open book carrying a torch.

As you step into the doorway, the bookcase appears to be a ringer for the handful of old Carnegie bookcases in town, roughly the same size and design, minus a few decorative flourishes like ceiling moldings. . I imagine if you told most customers it was the same at St. Anthony or Riverview branches, they would believe you.

These libraries have been variously enlarged, restored or sold, but each remains a historical landmark in their respective neighborhoods. For example, when the SPPL built a new East Side Library to replace the long-suffering Carnegie Library on Greenbrier Street, they found a new site a few blocks away and rented out the old building. Today, the old building is home to the East Side Freedom Library, a non-profit organization that has reused the building in a wonderful way.

Some library advocates are considering a similar fate for the Henry Hale building, offering different options that would allow a new facility to be moved somewhere nearby.

From a librarian’s perspective, there is a long list of flaws with the existing structure, ranging from HVAC issues to ADA accessibility to space requirements. From my reading of the existing documents, the building boundaries seem to be more of a problem than they are worth, for the library’s long range plans.

That’s why the Hamline-Midway Library Association, a grassroots group that lobbied to save the facility 12 years ago, released a statement earlier this year in support of the demolition.

To conclude their position, they write:

We would also work to ensure that we have opportunities as a community to deal with any difficult emotions that would arise from losing our old library and building a new one, and to find ways to respect and integrate the story of the bookcase in a new design.

At this stage, the CIB proposal is not explicit on the future of the building. If the Hamline-Midway branch receives its funding, the designated dollars would be unlimited. Library administrators could either use the dollars to restore or replace the structure, and have not stated their plans explicitly.

Meanwhile, right next to the Henry Hale building, Lloyds Pharmacy, a two-story wooden building, is currently being rebuilt a year after it was set on fire by an arsonist. At the time, community members mourned the loss of the structure and the institution. For many residents of the Hamline-Midway neighborhood, including myself, it is heartwarming to see the building rebuilt in place of the burnt down ruins.

Only time will tell if the Hamline-Midway Library branch, with its bizarre history, can survive the complexity of the city’s funding rounds and institutional negotiations. City leaders will soon be forced to decide whether the building deserves the extra attention and time it would take to preserve the structure to serve another generation.

Correction: This version corrects the fact that the East Side Freedom Library is leased to the association that manages it.