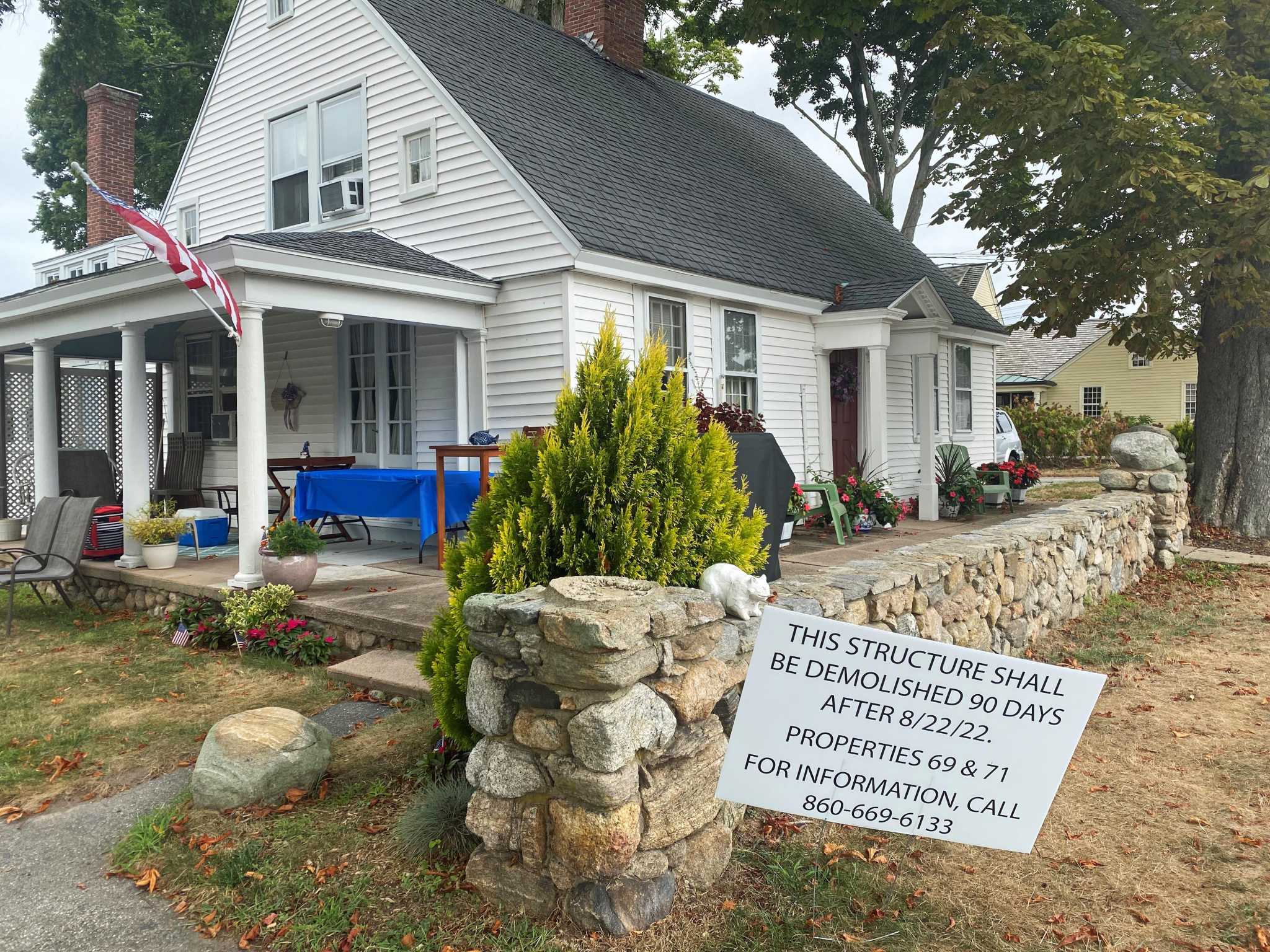 CLINTON — Residents and the State Historic Preservation Office are working to stop the demolition of a 1785 home on Waterside Lane that is listed on the National Historic Register of Historic Places.

Meanwhile, the builder of the project claims that the old house is not worth saving and that it would be more expensive to renovate it than to build a new one.

Although the city cannot stop a demolition, the Planning and Zoning Commission is holding a public hearing on September 12 to hear “protests” from neighboring property owners.

Time is running out for the planned demolition. The owner, Steven Bugg, posted a sign Aug. 22 on the property, as required by city bylaws, to notify that the home is to be demolished. This is required for any structure built before 1945, according to city building official Kathy King.

The owner has 90 days from that date before they can bulldoze the house, King said.

Whatever the commission’s findings after the hearing, it can make recommendations but cannot stop the demolition, King said, and only the state can do that.

King said she contacted the city attorney to “see what our rights are” regarding any action by the commission and the owner’s rights.

“Because if it becomes something that would go to court, I want to be ready,” King said.

The owner plans to tear down two buildings on the property and build a single-family home, according to builder John Giannotti of Waterside Building/Development II, which is involved in the project. No site plans have yet been filed in the city, according to King.

State officials say the house is protected because it is listed on the National Historic Register as a “protected resource.”

Local historian Peggy Adler of Clinton and interested neighbors had submitted a paper petition to the city’s zoning office for local regulations to go into effect and allow them to formally protest to the zoning board.

Adler and lifelong Waterside Lane resident Maureen Wellman collected more than 50 signatures from street residents; they only needed 20 within a 500 foot radius, according to zoning laws.

Adler is leading the fight at the local and state levels to save Captain James Farnham’s home at 69 Waterside Lane, a “contributing resource to historic Clinton Village,” the online petition says.

The house is one of 100 “major buildings” in the district listed on the National Register of Historic Places, according to records from the local Clinton Historical Society on the city’s website, clintonct.org.

That means buildings in the district listed as “contributing resources” fall under state laws — not local ordinances — for demolition.

And there are plans for a third National Historic District in Clinton that would encompass Commerce Street, home to gracious sea captains’ homes, and Leffingwell Road, which has examples of 1920s kit-built homes. The State Historic Preservation Council recently approved a $20,000 grant to hire a consultant, according to Adler.

To start the process with the state, Adler submitted an online petition with more than 700 signatures to the state’s office of historic preservation.

Waterside Lane, which features a collection of 18th and 19th century homes, is known as a scenic street that leads to Clinton Harbor.

“The law is pretty straightforward,” said Todd Levine, an architectural historian at the State Historic Preservation Office. “The threshold for respecting the law is: is it historic? Is it under threat of demolition and if so then under the public trust we can make an injunction.

But first, there must be a public outcry against the razing of a protected building, he noted.

“This outcry is demonstrated by a petition and letters of support for the preservation of the building – hundreds and hundreds of signatures,” Levine said. “We don’t get involved if 20 people are crying about a lost building, even though it’s important. We must have considerable community support for preservation.

Protection of these historic buildings falls under the Connecticut Environmental Protection Act passed in 1971; the National Register of Historic Places was later added to the law in the 1980s, according to Levine.

“It’s the same law that protects clean air and clean water,” he said. “It’s in the public trust because it’s limited resources. Once they’re gone, they’re gone forever, like endangered species,” he said.

But Giannotti disagrees and doesn’t think the house is worth saving.

“The previous owner made it a two-family house, it has vinyl siding, stainless steel pipes going up the side for the chimneys,” he said. “Nothing has ever been done to keep it in the character of the original state.”

“My client wants to go there – and in my opinion he is right – and build whatever he wants there,” he said.

“Obviously keep it in character at Waterside Lane, make it feel like it’s always been there. They’re not going to build a monstrosity,” Giannotti said.

There are no deed restrictions or statements on the deed that it is on the National Historic Register, Giannotti noted.

“If my client bought it with the specific stipulation that you’re in a historic district or you’re on that state or nation registry or whatever, then it’s shameful for them – they don’t haven’t done their due diligence.”

Levine admitted it can be confusing for landlords, real estate agents and developers. However, he pointed out that the information or identification of being on the national registry is not included on land deeds, but is listed under the National Parks Service and in Connecticut with the State Historic Preservation Office.

Giannotti is not against historic homes, he said.

“I don’t like seeing these old houses demolished,” Giannotti added. “But if you go inside, no one has held them down like they should be.”

“You could spend a million dollars to bring it back to its 1700s state,” he said. “But that’s not what my client wanted to do when he bought it. You basically tell him how to spend his money.

But Levine said he hopes to work with the owner.

“We want to contact him early so he knows what the process is,” Levine said. “And we can hopefully work with him and find a solution that saves the building. that’s the goal at the end of the day.

Wellman, whose family has lived on the street since the town’s earliest days when it was part of the original Homenoscitt plantation in the 17th century, noted that visitors enjoy coming to Waterside Lane and looking at the houses.

“Waterside Lane is known in and out of town as one of the most beautiful streets. … We have all kinds of people walking down the street all the time,” she said. “And that’s because of its history – it’s just a beautiful street. There are so many old houses.

“So shooting one down doesn’t make sense to me,” Wellman said.