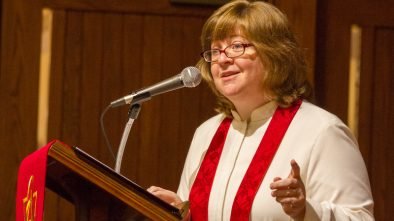 The new regulations for religious uses in St. Paul are very different from what they were a few months ago, when they caused a citywide outcry.
The passage of the new regulations will clarify and streamline how faith-based institutions can use their buildings and grounds. The current version of the ordinance won a recommendation for approval in December from the St. Paul Planning Commission. The settlement must be passed by February 1, the deadline ordered by the federal court.
On December 17, the St. Paul Planning Commission unanimously approved the proposed settlement, which was extensively rewritten after a public hearing in October. Sixteen speakers and approximately 150 individuals and institutions sent written comments, all raising objections to the original proposal. Planning staff and a commission committee worked with the Interfaith Action Coalition and others to revise the ordinance.
Faith leaders and congregational members said the regulations as originally presented would negatively impact their work serving communities through a host of programs and services. Potential conflicts with the free exercise of faith under the federal government prompted the Planning Commission to drop a proposed incidental use regulation. This could have limited new construction to ancillary purposes.
This section of the proposed ordinance was also considered a violation of the federal Religious Land Use and Institutionalized Persons Act (RLUIPA). RLUIPA prohibits local governments from regulating land use that imposes a substantial burden on religious exercise.

The churches of the region weigh
Several churches in the Midway area have requested changes. One is the Bethlehem Lutheran Church Halfway, 436 N. Roy St. Pastor Kirsten Fryer highlighted the many roles of the church in the community, including providing refuge to neighbors affected by smoke, tear gas and pepper spray during the 2020 civil unrest after the murder. of George Floyd. “Without a doubt, we said yes because we believe that our religious community obliges us to provide shelter to those in need,” she said. This led to it becoming a food hub serving 17,000 people while local grocery stores were closed.
The church has been home to Open Hands Midway since 2009, which provides meals and food. A new food shelf was created in 2020. A previous version of the bylaw would have required the church to go through the conditional use permit review and approval process.
St. Anthony Park United Church of Christ, 2129 Commonwealth Ave., sent a history lesson to the Planning Commission.
“.. our church hosts a scout troop. Troop 17 celebrated its centennial in 2015. It is the second oldest continuously chartered troop in Minnesota and the oldest continuously chartered troop in Minnesota by (the church) an organization. This troop still meets in the same building as when it started! While we expect this relationship to be grandfathered, we believe the rules should also support new, similar relationships… If a place of worship has more space than it can use for the good of the community, why couldn’t they use it?” The letter was signed by Reverend Victoria Wilgocki and Moderator Beth Magistad.
Reverend John Marboe of Zion Lutheran Church, 1697 LaFond Avenue, called the original ordinance “very problematic.” He challenged the definition of “accessory” uses of the city. “Religious education is essential. Feeding the hungry is essential. Serving the poor is paramount. Fostering healthy communities is paramount. A community that ‘worships’ without engaging in these things is not worshipping,” he said.
Marboe called several aspects of the original ordinance too restrictive, adding that the ordinance as it was first drafted “restricts the ability of religious institutions to do things that actually improve neighborhoods and communities.” communities and make the city more livable”.
Dozens of other people from across the city weighed in, all opposing the regulations. One person offered to pray for the Planning Commission.

So what has changed?
The city council will act on an ordinance that does not regulate so-called accessory uses and the notion of building more space to accommodate them.
Restricting new buildings and additions is seen as a burden on growing congregations, Dermody said. Many religious institutions maintain multi-purpose spaces that are used for a variety of events, including events open to the whole community.
Many uses of the city considered accessory uses are in fact essential to the mission of a congregation. “The institutes provide valuable community services that complement government services,” the city staff report says.
The proposed settlement no longer includes a conditional use permit requirement for social services and community uses over 1,000 square feet. Conditional use permits would now be required for uses over 7,000 square feet and for homeless-serving facilities such as drop-in centers. This mirrors homeless services zoning bylaws passed by City Council in the fall of 2021.
Overnight shelters for up to 25 adults and homeless services are still considered incidental uses.
A night shelter is a place where people using the shelter pack their bags and pick up their belongings every morning. Emergency accommodation allows people to stay longer. The number of emergency dwellings would be limited by occupancy regulations related to building and fire codes, not zoning regulations.
Day care centers and kindergartens, which are only allowed in the former regional institutions, would now be allowed in the current institutions. Many places of worship lease space to day care centers and preschools, but have been grandfathered because they predate the current zoning code. Changes could have affected the Midway churches which house day care centers and preschools. These include Hamline Church United Methodist, 1514 Englewood Ave., and Knox International Center, 1536 W. Minnesota Ave.
A proposal raised at the October hearing is not addressed by the latest round of zoning changes. St. Peter Claver Catholic Church, 375 N. Oxford St., would like to add senior housing to its property. That would be allowed up to current single-family zoning, Dermody said. But the church, school and clergy quarters are within a block near traditional mixed-use and multi-family neighborhoods, so a separate rezoning application would accommodate those plans.
Another pending change concerns the definition of community centres. This is a change that would go beyond denominational institutions.
St. Paul has had what are defined as “non-commercial recreation centers” for many years. These regulations have covered municipal recreation centers, which since the 1970s must have conditional use permits. Dermody noted that several recreation centers in the city do not meet all current requirements. For example, Linwood, Groveland, and Martin Luther King Recreation Centers are not located on thoroughfares. now. The proposed amendments would eliminate the arterial requirement and conditional use license requirement for municipal, religious and non-profit community centres.
Some small uses, such as travel agency accounting departments or small offices housed in religious institutions, would only require review and approval by city staff for approval. These are regulated in the same way as home occupations.
The proposed changes are sparked by the long fight over Listening House, which moved from downtown to a church in Dayton’s Bluff several years ago. The homeless drop-in center opened with the approval of city staff, but without a neighborhood process. Neighbors protested and the matter was taken to the planning commission and the city council.
A debate over the city’s operating conditions for Listening House, considered onerous, has landed in court. The House of Listening remains open.
The city is to set regulations for uses in faith-based institutions, as part of a 2019 U.S. District Court-ordered settlement with the host First Lutheran Church. The city had imposed more than a dozen operating conditions on Listening House, prompting the lawsuit filed by the church.