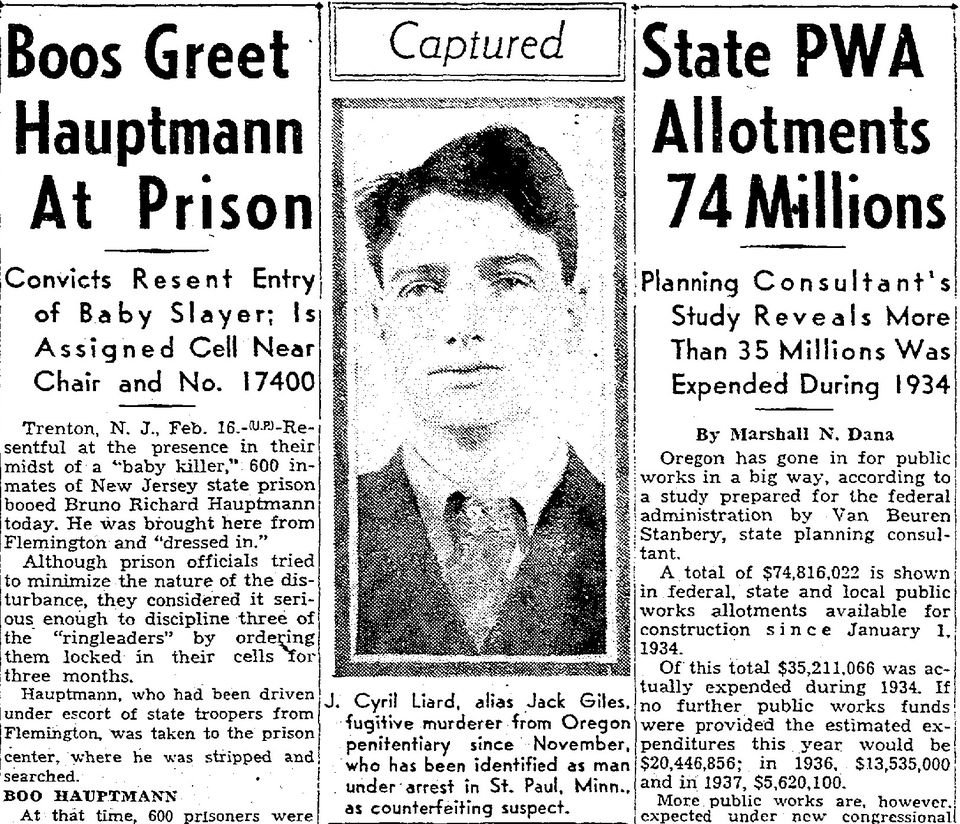 The young nurse fell in love with John Knight Giles.

She did not protest his plan to kidnap wealthy Portlanders. She found the insight of his plan – and his arrogance about it – exciting.

Then, in the fall of 1918, everything went wrong. A sheriff’s deputy lay dead – brutally murdered – and Augusta Carlson ended up in jail. Now she wanted to tell all about her boyfriend, and everyone in town wanted to hear what she had to say.

Because Giles had already put on a show in public.

Giles — born in Tennessee and raised in Washington state, where his father worked as a sawmill operator — seemed to have the brains for big accomplishments. As a child, he had shown such remarkable ability that he skipped several grades. He was a high school student at 12.

But scholarship did not offer the excitement of breaking the law. As a teenager, he began robbing sedans and hijacking automobiles. In 1915, at age 19, he landed in Walla Walla State Prison when a potential victim, a seemingly wimpy doctor, caught him firing back.

On September 23, 1918, he snuck aboard a mail train from Everett and fled with a suitcase full of Liberty bonds, checks, and money orders. Law enforcement said the theft was carried out in “true Wild West style”.

Giles had much bigger plans. Now using a newly adopted name – John Cyril Liard – he would snatch wealthy men from around Portland and hold them for ransom.

He found a remote, densely wooded location in Vancouver where he would hide his victims. Then he spent the fall collecting the addresses of well-to-do neighborhood citizens, starting with the Ladd family.

He typed a letter to give to each kidnapping victim after entering the person’s home. “I cover you with my pistol,” the letter began. He continued:

I am armed to the teeth and my accomplices have surrounded the house. If you outcry, move, or threaten me in any way, I will kill you and any family members that appear.

We want $50,000. You can pay this amount or not, as you see fit. If you want to pay, you’ll have to come with me. You must do this, however, without arousing suspicion. A hint to the servants or one of your family members will be enough for me to shoot everyone in sight.

Read this until you fully understand it, while standing absolutely still.

Giles also typed letters to leave with the families of his victims, encouraging them to pay the $50,000 – the equivalent of nearly a million dollars today – without pressing charges.

This second letter advised the family not to publish the abduction in the newspapers, “not that we fear immediate trouble from the law or its stupid defenders, but because we do not care to bring a unnecessary competition to our profession by attracting mediocre bandits to this essentially easy form of theft.

The letter ended by emphasizing that the author’s eloquence should not be interpreted as suggesting sensitivity to the use of violence.

“Think about the fact that one can have knowledge of rhetorical forms and make no distinction between the killing of a human and the destruction of any other of the many forms of organic life,” he said. “Murder and cruelty are not the weapons of the degenerate, vicious, and ineffectual on Earth alone, but, on the contrary, find their highest expression in the hands of men of action and achievement.”

Thing is, John K. Giles turned out to be one of those mediocre villains he made fun of.

On the night of November 19, he and Carlson, 24, got into his Hupmobile roadster and drove to one of the Portland addresses on his list. But his future victim was not at home. The couple tried three other addresses, each also only offering on-site staff.

Giles, frustrated, headed for the new Interstate Bridge, and he and Carlson walked around the Vancouver hideout he had chosen. After they crossed the bridge again, Giles decided he couldn’t bear to end the night without showing anything for his efforts.

He pulled over to the side of the bay, put on a wig and “Charlie Chaplin mustache”, left Carlson in the moving car, and sabotaged him to the toll collector.

“Give that money!” Giles asked, pointing two guns at the clerk.

He ran to the roadster, jumped in – “I’ve got it, hurry up,” he told Carlson – and the vehicle roared away.

It was in haste that he made a mistake.

One of them, Jack La Monte, was fixing his machine. “You’ve got it, Frank,” he told his partner, Frank W. Twombley, 27.

Deputy Twombley started his bike and launched after the speeder.

For three miles, the cop chased the car through the empty streets of Portland, before finally finding an opening and parking next to the roadster.

“I saw the deputy get in beside the car on his motorbike and raise his hand for us to stop,” Carlson later recalled. “As he reached the side of the machine, Liard took out one of his pistols…and fired three or four times.”

The motorcycle spun, knocking Twombley to the ground, dead.

“My God, what did I do?” Gilles exclaimed.

“You killed the officer,” Carlson told him.

After driving several more miles, Giles pulled the vehicle off the road and buried his weapons in a field. Back at their apartment on Southeast Belmont Street in Portland, he told his girlfriend “not to be scared and forget what happened.”

By then, the police had already launched a murder investigation – and weren’t moving anywhere quickly.

“The gray Hupmobile could not be found,” wrote a journalist. “All the usual sources and saddle pigeons failed to produce a single clue. The underworld knew nothing.

But a few days later, a traveling salesman came across Giles’ hastily tossed disguise on the side of a road. Above all, there was a laundry slip with it. This small piece of paper led the detectives to a laundry business, which led them to the Dennison apartments, where Giles and Carlson were locked up.

When police arrested the couple, Giles insisted he was not involved. The cops, he said, had nothing but “innuendo and off-the-cuff remarks.”

Then his bravado cracked. He told detectives he returned home on the night of November 19 feeling unwell and his daughter was out in the roadster alone.

He added that in the morning he discovered the car was so dirty he had to have it washed for the second time in two days.

Carlson was shocked to learn that Giles had sold her.

She was in love with him – the nurse had been in love from the moment she met the dashing young man a month ago. But she wasn’t willing to take the rap for him.

John Liard was a liar, she told The Oregonian’s “female reporter” Edith K. Holmes as the two women sat in the county jail‘s austere nurse’s room. “He’s trying to put all the blame for his crimes on my shoulders, but I’m innocent.”

“Anyone is susceptible to falling, and I fell in love with Liard,” she said. “If he hadn’t been attractive and if I hadn’t believed him to be a good boy, I wouldn’t have gone to live with him. I went to live with him, it’s true, but I intended to marry him.

Shortly after moving in with Giles, she realized “he was not the kind of man I had been led to believe,” she said.

Holmes asked why she hadn’t abandoned him.

“My dear lady, if you had someone pointing a gun at you all the time, you would know what I’ve been through these three weeks,” she said. “I was terrified the whole time. He was gentle enough to trick me at first – and to keep me in gun range after he had me.

She added defiantly, “Let him who is without sin cast the first stone at me. »

Carlson, who would ultimately not be charged with a crime, was a compelling witness. But George Mowry, the prosecutor, feared that Giles would be even more convincing. He told jurors that John Cyril Liard, the name under which Giles stood trial for murder, would try to use his upbringing to confuse and dazzle them, calling him ‘the smartest defendant who ever sat in this court. “.

Giles’ mother, who watched the trial wringing her hands, “collapsed in hysteria” when the sentence was handed down.

Giles did not share his anger. He “looked forward to living a life in prison with a philosophical air,” wrote The Oregonian.

He was Nietzsche’s Ubermensch, after all. He stood above conventional “herd morality” and fears.

Giles proved a model prisoner at Oregon State Penitentiary and quickly became a devotee. He asked Governor Julius Meier for forgiveness but did not receive it. After 15 years behind bars, he acknowledged that good behavior had gotten him as far as he could. He disappeared while he was with a team of prisoners.

Reporting on Giles’ escape in 1934, The Oregonian used the pseudonym Hilda Swennson when referring to Carlson, as she still lived and worked in the area.

Giles spent three months on the loose, before agents in Minnesota arrested him for forgery and assault. He landed on Alcatraz Island, the new federal penitentiary in the San Francisco Bay Area that housed mobster Al Capone and other high profile criminals.

He attempted to escape from The Rock in 1945, “dressing as an army sergeant and boarding an army boat”, his prison records show. He was discovered after about an hour and sent back to jail.

Giles ended up in the Oregon State Penalty in 1952 and was paroled two years later, with prison officials saying “the years have mellowed him considerably”. He died in California in 1979.

Frank Twombley, who left behind a wife and baby, will not be forgotten. Four decades after his murder, with the establishment of a National Peace Officers Memorial Day, Multnomah County Sheriff’s Deputies began honoring him annually in a public ceremony.