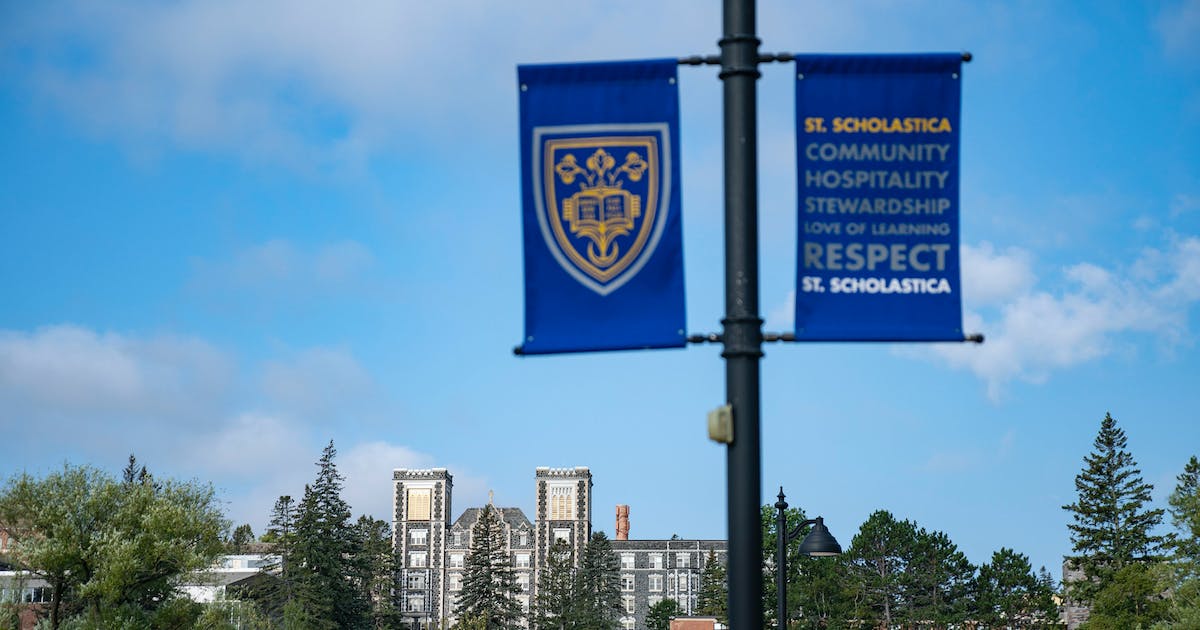 St. Scholastica was penalized Wednesday by the NCAA Division III Infractions Committee at the end of its investigation into the former Saints men’s hockey coach Kevin Moore.

The NCAA found that Moore provided ineligible benefits to three international student-athletes in the form of loans for off-campus housing and a free meal. He has also participated in voluntary sports activities that coaches are not allowed to attend.

The penalties the private school in Duluth received for these violations included two years probation in men’s hockey, a $2,500 fine, a public reprimand and a censure.

St. Scholastica, which joined MIAC this school year, must also undergo an external audit of its athletic policies.

North Dakota Goalie Zach Driscollan Apple Valley senior, has been named the NCHC’s Goaltender of the Month for February, the conference announced on Tuesday.

UND Coach Brad Berry received a contract extension through the 2025-26 season. Berry is in his seventh season and his team needs a win to clinch a third consecutive Penrose Cup.

Minnesota State Mankato Dryden McKay was named co-goalkeeper of the month for February by the ACHC.

McKay, who received the same award in October, November and December, was 6-0-0 in six starts last month with a 0.83 goals-against average and .965 save percentage.

Seven Gophers swimmers will compete at the NCAA Championships March 16-19 in Atlanta, the NCAA announced.

Van Berkom’s seeded 400 IM time of 4 minutes, 3.45 seconds is the seventh fastest in the country this year.

Minnesota will also have five stints in the national meet.

• South Dakota State scored five runs in the first inning – three out of by Drew Beazley homer — and beat the Gophers 7-5 at US Bank Stadium. Ron Sweeney hit a solo homer for Minnesota (3-7) and Jack Kelly a triple and a sacrificed fly. The Jackrabbits are 2-6.

Matt Binglethe director of athletics and cross country for the Gophers, was named the 2022 Big Ten Conference Indoor Female Coach of the Year after her team won its second straight indoor conference title last weekend in Geneva, Ohio.

Jeremy Van Acker from Crown College repeated as a track athlete in UMAC competition. He won the mile in conference competition, was second in the 3,000m and 5,000m, and ran relays that placed second and third.

from iowa Adam Mazur, a Woodbury sophomore, was named Big Ten pitcher of the week for the second week in a row. He allowed three hits in 7.2 innings and struck out nine while walking two in a 2-0 win over Pepperdine.

No. 1-seeded Augsburg beat No. 5 Bethel 7-0 and No. 7 St. Olaf beat No. 3 St. John’s 3-1 by Tyler Cooper Game winner at 7:20 of the third period of the MIAC Men’s Hockey Tournament Semifinals. The Oles will play Augsburg at 7 p.m. on Saturday in the title game.

No. 4 seeded Gustavus beat No. 4 St. Scholastica 5-0 and No. 2 Hamline beat No. 3 St. Mary’s 4-2 in the semifinals of the MIAC Women’s Hockey Tournament . The winners will play at Gustavus at 2 p.m. Saturday for the conference crown.