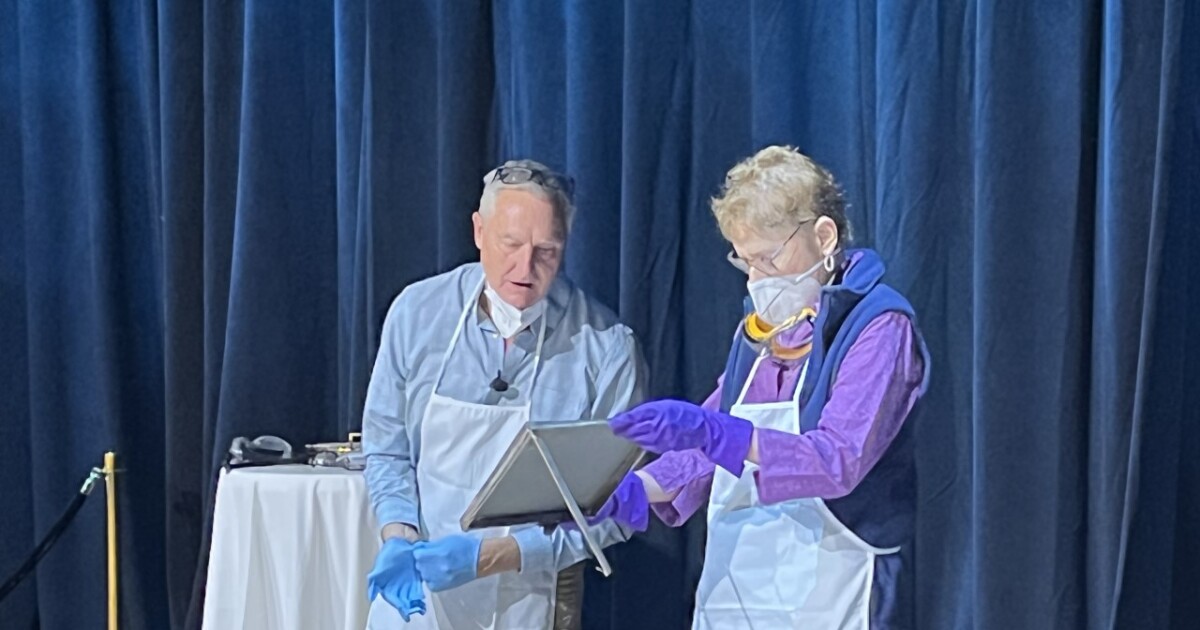 After an event on Tuesday to open the time capsule discovered in a cornerstone of the Hale Memorial Church, there’s still a lot of work to do before we know exactly what’s inside.

The church was purchased by Kim Blickenstaff and the KDB Group in 2021. A series of attempts to restore and renovate the building encountered problems with an unstable roof, holes in the ground and vandalism. Eventually, the band decided to demolish the building and develop an outdoor performance venue.

KDB Group Chairman and CEO Greg Birkland obtained the time capsule when it was found approximately four days after the church was dismantled by JIMAX Demolition. The 15-pound copper box was found inside a cornerstone of the building, nestled in a block with the dates 1868 and 1900 engraved on it. Hale Chapel was founded in 1868 and the time capsule was placed inside the block when it opened as the Hale Memorial Church in 1900. This means that some of the items in the capsule could have up to 150 year.

Birkland said that according to an article discovered by Chris Farris of the Peoria Public Library, there is likely a Bible and documents from the old chapel and the new church in the box.

“You could see there was heat damage, water damage on the outside. But today when we opened it up, we found the inside was phenomenal,” Birkland said. “Everything is intact. And we have a great story to tell once we start going a little deeper into the box.

About 50 people gathered at the Scottish Rite Theater to see the opening of the 122-year-old capsule.

The capsule opening process took about 15 minutes. Birkland used a diamond blade and a Dremel tool to cut through the seal. He sought advice on the process from Katherine Ridgway, state archaeological curator at the Virginia Department of Historic Resources.

“We were really worried, opening this time capsule, because (it) was so old that it could be full of mold, in particular, because there were two fires in this building,” Birkland said. “So and then also lead, you know, I was cutting lead today, we had HEPA filters and also on the vacuum. That way we protect, you know, everyone around us.

Birkland also had X-rays of the box taken by Dr. Miguel Ramirez, orthopedic surgeon at OSF Orthopedics. Images found a gap of a few inches at the top of the box, providing a safe place to cut without damaging anything inside.

As soon as the box was opened, professional paper conservator Ana Lyra took over. Luckily, she found no mold, but found the contents wrapped in yellowed paper that will take a longer process in a humidity-controlled space to unravel.

“You have to loosen the paper. Paper is made of fibers and the fibers needed to relax but gradually,” she said. “You have to put him in a temporary place that’s not going to hurt him and work the next day or two.”

The work will also consist of cleaning the copper shavings from the cutting with a small vacuum cleaner and testing the acidity and fragility of the paper.

“I’m not going to tell you what’s going to happen with the paper itself,” Lyra said. “Because the newspaper will tell me first.”

However, the first images are promising. Although the building has suffered two fires and the exterior of the capsule shows fire damage, the paper inside is clearly legible. A title reads: “The Flying Roll” with smaller text below.

“I’m surprised, but when you see where it was, the stone was protecting it,” Lyra said. “So it was a very good thing that he was well protected.”

While he doesn’t yet know exactly what’s in the box, Birkland is glad there’s been some definite progress for an interested audience.

Birkland said updates to the time capsule content will be posted here on the Scottish Rite Theater website.