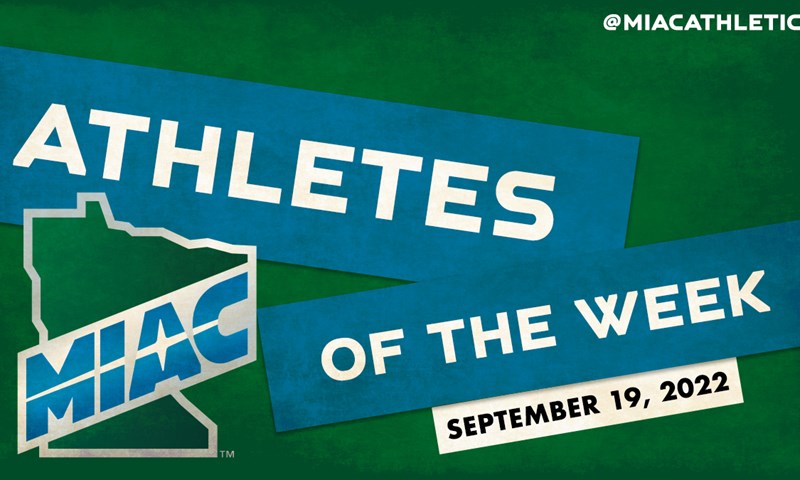 The MIAC Athlete of the Week awards are nominated by Conference sports information directors and selected by MIAC staff. Throughout the fall season, team sports week athletes (football, soccer and volleyball) will be recognized on Monday afternoons, while individual sports (cross country and golf) will be announced on Tuesday afternoons. The winners of the latest Athlete of the Week awards are listed below, along with details of their outstanding performances.

Daniel Rennie had the second-most passing yards in program history in the Gusties’ 28-25 loss to UW-Stout on Saturday. In just his second college game, Rennie completed 28 of 34 passes for 467 yards and three touchdowns. He also had a rushing touchdown, helping to score 24 of the team’s 25 points in the game. His passing performance was the sixth game over 400 yards in program history and only the second north of 450 yards.

Jariel Lopez-Barrera picked up two fumbles and returned them both for touchdowns in the Auggies’ 45-7 win over Martin Luther on Saturday. He returned a 73-yard fumble for a touchdown in the first quarter, then returned 29 more yards for a score in the third quarter. Lopez-Barrera also had two solo tackles in the game.

Kevin Xiong blocked a punt and recovered the loose ball in the end zone for a touchdown early in the fourth quarter of the Knights’ win over UM-Morris on Saturday. The line of scrimmage on the play was the 31-yard line and the deflected ball rolled to the end zone where Xiong picked it up for the score. It was Carleton’s first blocked punt since the 2017 season.

Hannah Wilhite led the Royals to three wins at the Region IX Invitational this weekend, averaging 10.55 assists per set, 2.00 kills per set, 2.64 digs per set and 0.45 aces per set . Named the tournament MVP, Wilhite had 116 assists while orchestrating Bethel’s offense to a .256 hit percentage. In a four-set win over St. Olaf to close out the weekend, Wilhite recorded a season-high 47 assists to go along with 12 digs for his first double-double of the year. She added eight kills and 39 assists against Cornell on Friday and had seven kills, 30 assists and four service aces in a straight-sets win over Wartburg on Saturday.

Selena Rodriguez recorded 57 digs (4.75 per set) in the Oles’ three games at the Region IX Invitational last weekend and had at least 15 digs in every game. The senior started the weekend with 19 digs, five assists and two aces in a five-set win over Wartburg on Friday that ended the Knights’ 10-game winning streak in the series. Rodriguez followed that up with 15 digs in three sets against Cornell and 23 digs in four sets against Bethel on Saturday.

Otis Anderson scored twice as the Gusties shut out Carleton, 3-0, on the road last weekend. Seeing time on the attacking side of the pitch during the game, Anderson scored the winning goal early in the first half from a header, then scored from the penalty spot late in the game. Typically a defender, Anderson also helped keep St. Scholastica off the board earlier in the week as Gustavus beat opponents MIAC 6-0 to open conference play.

Drew Collins helped the Auggies earn two conference shutouts last week in a 4-0 win over Hamline (9/13) and a 0-0 draw at Macalester (9/17). Collins played all but eight of Augsburg’s 180 minutes in the two games and delivered a life-saving tackle on a goal attempt against the Scots. Augsburg’s shutout streak is now 359:04 over four games and Collins played a team-best 456 minutes for the Auggies this season.

Jayla Ponce scored three goals with an assist in the Auggies’ two wins to open MIAC play last week. Ponce scored a 61st-minute penalty goal to give Augsburg the lead in a 2-1 home win over Hamline on 9/14 and went on to score the game’s second and third goals – and assist in the final count – in Victory 4-1 from Augsburg to Macalester on 17/09.

Grace Sprangers went 1-0-1 with a 0.50 goals-against average in two starts last week for the Oles. The senior allowed just one goal from 180:00 into the net while stopping six of the seven shots she faced. Sprangers also recorded their second career shutout in a 0-0 draw at Hamline on Saturday.