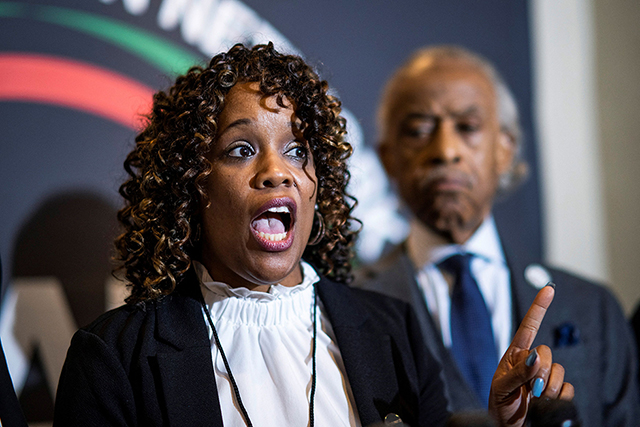 Rochelle Olson writes in the Star Tribune: “The decision not to charge the Minneapolis police officer who fatally shot Amir Locke in a botched no-hit raid in February came as no surprise to legal observers, many of whom said the law left members of the public in danger.. “If they had taken this to court, it probably would have been dismissed out of hand,” said T. Anansi Wilson, a professor at Mitchell Hamline School of Law. “The problem here is the law and that we trust the police more than the citizens.” … Legal experts interviewed for this story agreed that the decision was the correct one under current law, and they expressed sympathy for Locke. But some have questioned the need for a no-knock warrant and called for changes to the law, suggesting officers should have done more research to determine who might be in that apartment.

For KMSP-TV Reporting by Samantha HoangLong“Amir Locke’s mother says she’s ‘disgusted’ with Minneapolis after prosecutors announced their decision not to charge the officer who shot and killed his 22-year-old son in an unshot raid in February. Karen Wells, mother of Amir Locke, was joined by the Reverend Al Sharpton and attorney Ben Crump on Wednesday afternoon in New York to talk about prosecutors’ decision not to charge Mark Hanneman, the police officer in Minneapolis who shot the 22-year-old gunman. while serving a no-hit search warrant in February.

In the Duluth newsstand John Myers reports“Snow had turned to rain across much of Northland by mid-morning Wednesday, but not before the ongoing spring storm dumped several inches of new snow across many areas.. The Duluth National Weather Service is continuing a winter weather advisory for much of the region through Thursday, with a winter storm warning for Lake and Cook counties in Minnesota’s Arrowhead, as the low pressure is moving very slowly out of the Midwest. Wet, sloppy snow made some roads messy and slippery Wednesday morning and caused Duluth Public Schools and a few others to cancel school for the day.

WCCO-TV reports: “A 17-year-old boy was arrested on Wednesday after officials said they received a tip that a teenager was planning to kill at least eight people at a southern Minnesota high school.. The Carver County Sheriff‘s Office said around 9 a.m. a boy planned to kill eight or more people at Central High School in Norwood Young America, a town about 40 miles southwest of Minneapolis. Deputies responded to the high school, where they identified a 17-year-old suspect and arrested him. Investigators say the boy admitted to making the threat and depositing the tip at the sheriff’s office.

James Walsh writes in the Star Tribune: “A former St. Paul City Council leader and longtime city resident with ties to the Rondo neighborhood have been named co-chairs of the committee that will recommend candidates for the city’s next police chief.. On Wednesday, St. Paul City Council announced that Kathy Lantry and Sasha Cotton will co-chair the police chiefs’ review panel. Cotton is a lifelong St. Paul resident with ties to the Rondo/Summit-University neighborhood. She is currently the director of the Minneapolis Office of Violence Prevention, which is responsible for coordinating violence prevention initiatives and engagement with communities in Minneapolis.

Reporting by Jay Kolls of KSTP-TV: “A man killed in an exchange of fire with the police Mental health issues were documented in Roseville on Tuesday, and a source said 5 EYEWITNESS NEWS officers responded to the suspect’s home earlier in the day during a mental health call.. Multiple law enforcement sources have confirmed to 5 EYEWITNESS NEWS that the suspect who shot a Roseville police officer is Jesse Werling, 53 years old. Werling fired at nearby homes and Roseville police responding to the shooting on West Owasso Boulevard and Victoria Street North around 7:30 p.m. Tuesday. Law enforcement officials say Werling fired more than 100 shots.

In the Pioneer Press, Neck Ferraro writes: “Maplewood Police are asking the public to keep an eye out for a pet monkey – named ‘Coco Chanel’ – who was allegedly stolen from a car on Tuesday night. Police say they were called to the parking lot of Cub Foods at 2390 White Bear Ave N. for a theft from an automobile report and Coco’s caretaker told officers she entered the store around 8:30 p.m. and had left the capuchin monkey in the car. its pink carrier. When she returned, the two were gone.

MinnPost’s in-depth, independent news is available to everyone for free – no paywall or subscription. Will you help us keep it that way by supporting our nonprofit newsroom with a tax-deductible donation today?