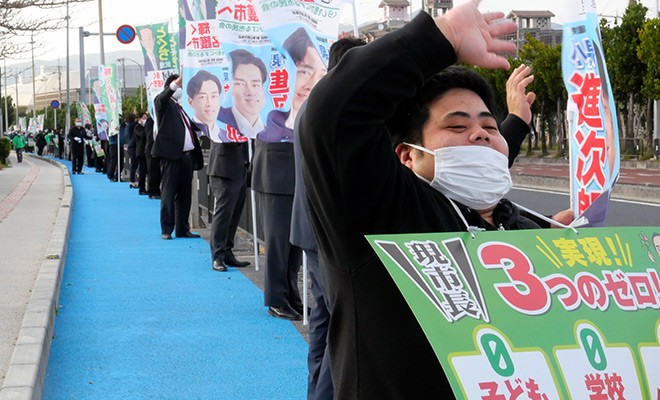 Young Okinawans have become more tolerant of US military bases stationed in the prefecture, a trend reflected in the Nago mayoral election won by incumbent Taketoyo Toguchi, a researcher on Okinawan issues said.

Toguchi, 60, was re-elected on January 23 despite not openly addressing the central government’s plan to relocate US Marine Corps Futenma air base to Henoko district in Nago during the campaign.

Yukihiro Yoneda, an associate professor at the University of Wako, said that while young Okinawans may be wrong about the contribution of US bases to the local economy, their perspective on the situation should be respected, he said. he declares.

Here are excerpts from Asahi Shimbun’s interview with Yoneda:

Question: We suspect that various factors are behind Toguchi’s victory. A survey we conducted with Ryukyu Asahi Broadcasting Corp. January 16-17 revealed that fewer people oppose the proposed relocation of the US military base to Henoko compared to the previous survey in 2018.

We are also aware that many Okinawans in their thirties or younger supported Toguchi in this election.

Responnse: A research team of which I am a member conducted a survey of residents of Okinawa and mainland Japan in the fall of 2017. The largest proportion, 39.1%, of Okinawa residents between the ages of 18 and 34, chose “neither agree nor disagree” as an answer. to the statement: “US Marine Corps Futenma Air Base should be moved to Henoko in Nago.”

In contrast, the largest proportion, 62.2%, of Okinawa residents aged 65 or older, chose “disagree” as their response to the same statement.

However, I guess all generations, not just the younger ones, in Okinawa feel this more or less.

Q: Mainlanders generally believe that most Okinawans are strongly opposed to the plan.

A: More Okinawans, of course, still say in polls, “It’s unfair that American bases in Japan are concentrated in Okinawa,” than those who don’t.

However, our survey found that up to 41.8 percent of Okinawa residents aged 18 to 34 did not support the civil organizations that protested the Henoko Plan. This percentage was the highest among any age group in Okinawa or mainland Japan.

Q: It is a surprise. The year 2017, when you conducted the survey, was when the Abe administration began construction of a sea wall off the coastline of Henoko district and repeatedly forced the withdrawal of protesters staging sit-in at the entrance to US Marine Corps Camp Schwab in the district. .

Additionally, a large rally of Okinawa Prefectural citizens to protest the relocation plan was held in the prefecture in 2017, when Takeshi Onaga, who opposed the plan, was the governor.

A: Our survey found that younger Okinawans were more supportive of Prime Minister Shinzo Abe and less supportive of Governor Onaga, compared to older residents of the prefecture. This finding reflects the national result.

Q: Five years have passed since your investigation. Do you think the perspective of young Okinawans has changed or will change as they get older?

A: I think it’s possible that their perspective changes with age. However, I think their opinion revealed by our survey was largely formed when they were even younger. Unlike older Okinawans, they did not experience the Battle of Okinawa or the control of the prefecture by the US military.

Unless something happens that shakes their perspective, how they feel won’t drastically change.

Q: Why are young Okinawans more tolerant of US bases in the prefecture?

A: We used statistical methods taking into account respondents’ answers to other questions asked in the survey. We found several reasons why young Okinawans are more accepting of the existence of US bases in the prefecture, including a lack of confidence in Japan’s security and distrust of the media.

However, we found that the factor that contributed the most to the difference between younger and older Okinawans’ opinions of U.S. bases was whether or not they felt that “Okinawa’s economy is not viable without American bases”.

Up to 53.3% of Okinawa residents aged 18-34 said they “agree” or “somewhat agree” with the statement: “Okinawa’s economy is not viable without American bases.

In contrast, 69.4% of Okinawa residents aged 65 or older said they “disagree” or “somewhat disagree” with the same statement.

This means that young Okinawans tend to passively accept American bases in the prefecture, as they believe that Okinawa earns a large income in exchange for hosting the bases.

A: I was surprised to find that there was such a big generation gap in how Okinawans viewed the circumstances the prefecture found itself in, not how they valued things.

Q: Why is there a huge generation gap?

A: I think the discrepancy is the result of an accumulation of experiences they’ve had over the years, including how closely they followed media reports, but I can’t say more.

This is just my point of view, but young Okinawans may think that the budget to promote the development of Okinawa prefecture is paid to the prefecture by the central government in exchange for accepting American bases, which means that the budget is only paid due to the basics.

Q: The budget to promote the development of Okinawa Prefecture is disbursed to the prefecture due to the historical reason that the prefecture was under US military control for 27 years after the war, as well as the geographical reason that Okinawa is a prefecture composed of islands far from the mainland. (The budget) has basically nothing to do with the American bases.

A: Older Okinawans may want to say to younger people in the prefecture something like “You don’t understand Okinawan history” or “Don’t be fooled by fake news.”

However, what is important is to reflect on what young people in Okinawa are going through and why they are feeling what they are feeling, not just criticizing them. I think Okinawans should try to understand each other better, rather than divide.

The “2017 Survey on Internationalization and Citizen Participation in Politics” was conducted from October to December 2017. The survey sheets were mailed to 10,500 Japanese nationals aged 18 to 80 selected randomly among the electoral rolls of 70 municipalities across Japan. Of the 70 municipalities, 10 were in Okinawa Prefecture, from which 1,500 respondents were chosen.

A total of 4,386 people, including 504 in Okinawa, responded to the survey. The response rate was 43.1% nationwide and 34.5% in Okinawa Prefecture. Response rates were calculated by excluding surveys that were posted but did not reach the selected respondents.

(This article is based on an interview with Norio Yatsu, a senior writer.)