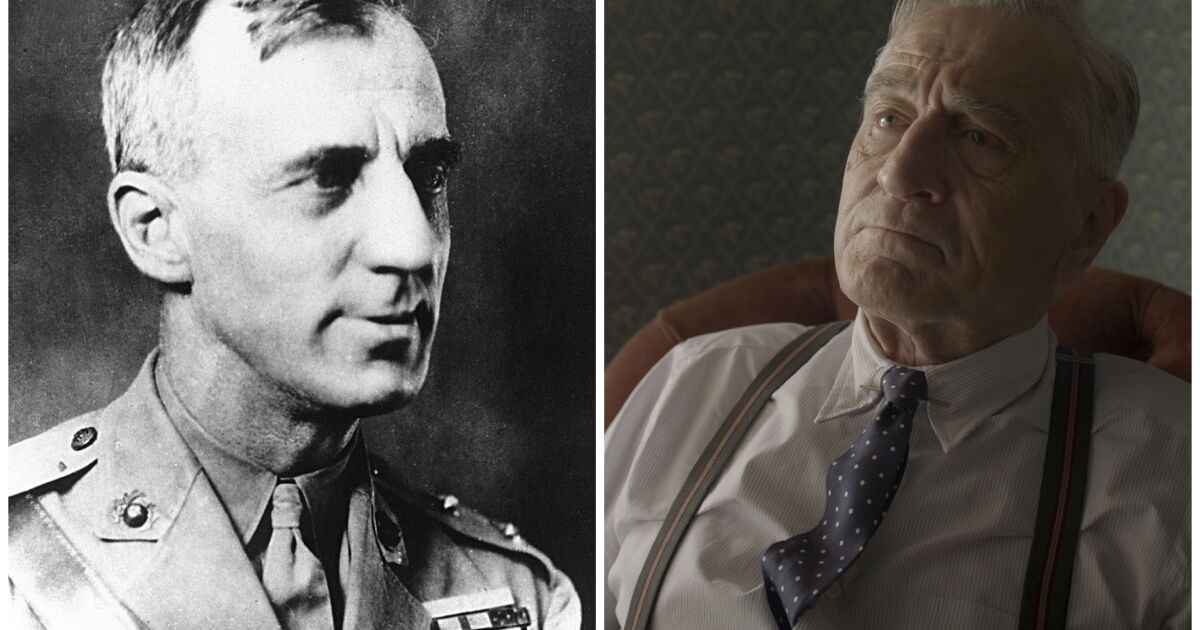 “Amsterdam”, by David O. Russell, initially presented as the story of three friends who found themselves “at the center of one of the most shocking secret plots in American history”, is presented as taken from a story true. But the film, in theaters now, adheres little to reality. It strays so far from the historic record, in fact, that Jonathan M. Katz, the journalist whose book “Gangsters of Capitalism: Smedley Butler, the Marines, and the Making and Breaking of America’s Empire” tells the story behind “Amsterdam “, believes that the film is only “10%” accurate.

Written and directed by Russell, “Amsterdam,” set in 1933, follows two World War I veterans, Burt Berendsen (Christian Bale), a doctor, and Harold Woodsman (John David Washington), a lawyer. The couple are approached by Elizabeth Meekins (Taylor Swift), the daughter of their former regimental commander, to perform an autopsy on her body after her suspicious death. Soon they are suspected of Elizabeth’s murder after she is pushed in front of a car and go on the run to find out who was after her father. They reconnect with their old friend Valerie Voze (Margot Robbie) and find themselves somehow entangled in a conspiracy against the US government. The period drama is largely fictional, although some elements were inspired by history.

The main historical event that “Amsterdam” focuses on is the so-called Business Plot, an alleged political plot from 1933. News of the plot came when retired Marine Corps Major General Smedley Butler claimed that a group of wealthy businessmen had approached him with a plan to overthrow President Franklin D. Roosevelt. The following year, Butler testified before the House Committee on Un-American Activities, saying the group was planning the coup. The committee’s final report stated: “There is no doubt that these attempts were discussed, planned and could have been executed when and if the donors saw fit.

In “Amsterdam”, this plot emerges in the middle of the film, although not everything is precisely described. Robert De Niro’s character Gil Dillenbeck is based on Butler and his role in Business Plot. In fact, the two newsreels featuring Dillenbeck in the film are recreated from actual newsreels. A representative of the group who wanted to overthrow FDR showed up at Butler’s house with cash in an attempt to convince him to participate, as shown in the film.

“There was a business conspiracy, or Butler alleged a business conspiracy,” confirms Katz. “And there’s good reason to think something was afoot. We don’t know how many people were involved. We don’t know if everyone Butler ended up implicating was involved. Oddly, the most movie-accurate part was the guy named Gerald C. McGuire. They changed everyone’s name except McGuire’s, even though they spelled it “MacGuire”. Gerald C. McGuire went to Butler’s house…He wanted Butler to go to the American Legion convention and give a speech, which they would write, denouncing FDR for taking the dollar off the gold standard. All that really matters is that Butler said, “Keep yourselves.”

Russell’s script is based on an event held for the Army’s 369th Infantry Regiment, an all-black World War I unit nicknamed the “Harlem Hellfighters”, where Dillenbeck is invited to speak. He feigns an alliance with MacGuire and the event is overrun by Nazis, who attempt to assassinate Dillenbeck when he goes off-screen. Although the Business Plot is real, none of this happened.

“It’s just completely wrong,” Katz says. “And it’s wrong in a very telling way. First, what Russell’s production designers clearly saw was a short documentary released in 2017 titled “A Night at the Garden,” which was found footage of Madison Square Garden in 1939. came about five or six years after Butler revealed the Business Terrain. This is where the designers of the production pulled the backdrop of George Washington. This is where they put people in Hitler Youth style uniforms. So it’s all smash together.

The film eventually reveals that the plot was concocted by a group of businessmen known as the Committee of Five, which never existed. “There was no secret organization like that going around murdering people,” Katz notes, adding, “What the movie does is it creates this fake cabal from the shadows I mean, it’s possible that someone was murdered by someone, but that’s not part of any historical record.

The Legacy of Smedley Butler

In the film, little information is given about the character of Dillenbeck, a retired officer from Maine – and the actual butler deviates from the character even on these points. He never crossed paths with the Harlem Hellfighters, nor gave a speech at an event they organized after the war. Although Butler’s ribbons and medals are recreated exactly in the film, he also wasn’t quite the hero Dillenbeck is made out to be.

“He would have earned those two Medals of Honor that sit atop his ribbon shelf by crushing resistance to the American occupation and invasion of Haiti,” Katz says. “And kill women and children. He was an integral part of an invasion force that killed mostly women and children in Mexico in 1914. Almost all of these ribbons were [from] places where Butler went and crushed democracy.

The film does not acknowledge Butler’s history, which is why McGuire thought he would be accessible to the coup in the first place.

“The reason the Business Plot was even thinkable was because all of these powerful people who were, allegedly or more likely, involved in this thing – including Smedley Butler, who eventually turned against them and exposed them – had made things like that all over the world,” Katz notes. “The American empire was coming home, and that’s really the story today.”

Russell’s film suggests that it was through Nazi influence that characters like Libby and Tom Voze (Anya Taylor-Joy and Rami Malek) became involved in the Business Plot. The characters are written as having been coerced by German Nazism, which Katz says undermines the reality that America had – and still has – its own history of fascism. In his book, he links the Business Plot to the January 6 Uprising, two examples of veterans being pressed to overthrow the U.S. government, and he believes Russell missed a key piece of the story in “Amsterdam.”

“What bothered me the most was the way the film portrayed this [as] some sort of german nazi cadet operation, and that it’s about wealthy americans who just have a jones for real nazism to the point that their topiary [is] a swastika on their lawn,” Katz says. “Russell is staging this completely fake event, with Butler/Dillenbeck giving the speech… There you have Hitler Youth guys and Nazi uniforms, and what that does is it visually and narratively reinforces the idea that fascism is this foreign European thing, that this was the only way fascism ever made its way into the United States.

“The Business Plot is not an example of German fascism wearing swastikas and Hitler Youth uniforms almost coming to power,” confirms Katz. “The Business Plot is an example of American capitalists, very, very wealthy Americans, playing with a kind of authoritarianism that was ascendant in Europe, but also drawing on the traditions and stories and trends that existed in the United States. .”