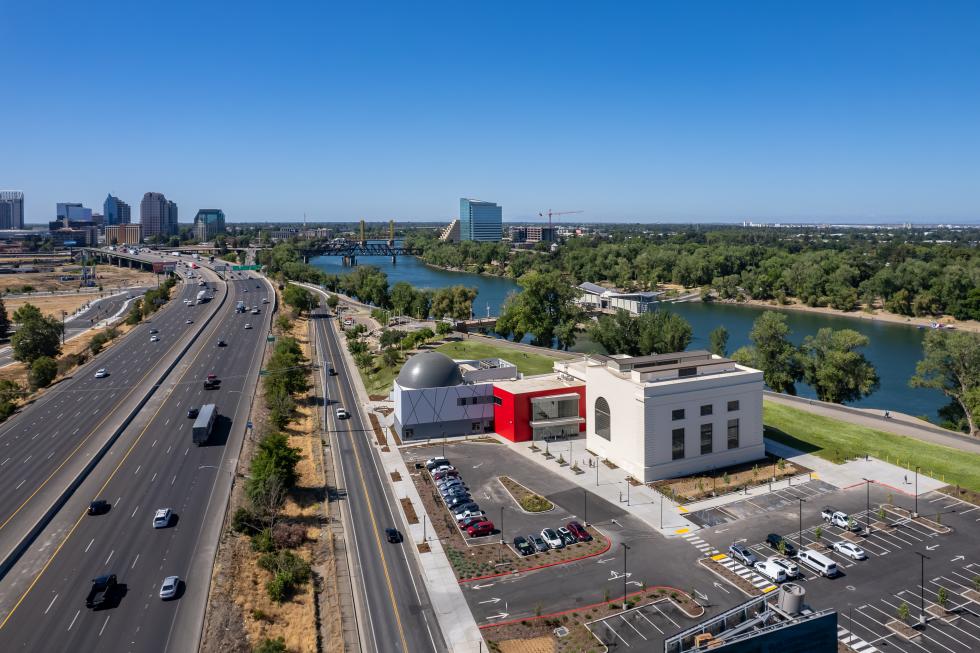 Built in 1912, the Pacific Gas and Electric Powerhouse, also known as Sacramento River Station B, sits on the banks of the Sacramento River just north of downtown Sacramento. It was designed in the neoclassical style with Beaux-Arts elements by prominent San Francisco architect Willis Polk. The building is listed on the National Register of Historic Places, the California Register of Historic Resources, and the Sacramento Register of Historic and Cultural Resources. Originally an auxiliary power station, it was modernized a decade later to become what was then the largest steam turbine power plant in Northern California, and it generated electricity for the region for another 30 years before being decommissioned in 1954.

The building then remained vacant, gradually deteriorating over the next 50 years, making the conversion of the structure the cornerstone of the new Sacramento Municipal District Science and Curiosity Museum a serious undertaking. The $ 52 million facility, slated to open in fall 2021, is expected to be the region’s premier informal science education institution, with hands-on interactive exhibits that will explore the wonders of science, technology , engineering, art and mathematics.

Otto Construction began working with the public-private partnership that will operate the new museum in 2008 as part of a collaborative design-build effort with Dreyfuss + Blackford Architecture, Buehler Engineering and the City of Sacramento, which owns the property. . It was the subject of numerous design iterations and value engineering exercises over the next decade, and of course the project required lengthy review and approvals from many federal agencies, state and local. Environmental challenges included the relocation of an elderberry bush which is the habitat of an endangered species of beetle, as well as other habitat issues regarding bats and Swainson’s hawks.

The inspection revealed several structural deficiencies that put the historic building in danger of collapsing. The roof was leaking and there were concerns about the strength of the concrete and possible corrosion of the rebar inside the walls. Eventually the team decided to remove the concrete roof and the east wall due to their low compressive strength. Otto also removed all the concrete on the existing steel structure so that the support system could be evaluated. It turned out that only a few columns in the old boiler room required partial replacement.

Before demolition could begin in 2018, massive concrete footings were placed around the building to support a temporary $ 2.5 million steel bracing system along the exterior of the building, including the installation took about three months.

Perhaps the most difficult part of the project was the demolition of the roof. The roof was not safe to walk on, so the demolition had to be done with a Brokk remote control demolition robot which was purchased specifically for this project. It was the only machine of its kind west of the Mississippi. The Brokk was hoisted above the roof by a crane and controlled by two workers in an elevator raised to roof level.

In addition to the new roof, a second story for exhibition spaces was added inside the powerhouse, and the historic steel windows were replicated with additional structural support to meet current code load requirements. wind turbine and energy efficiency.

One thing about the old building that a lot of people don’t realize: when the power plant was built, the river was the highway, so the building was built with its main entrance facing the river. Ships or barges pumped bunker oil into tanks on the south side of the building that powered boilers and produced steam to move turbines and generate electricity.

In front of the historic west window there was a large cartouche statuary which could not be restored due to the poor condition of the concrete. Otto digitally scanned the artifact before it was removed so that a new glass-fiber reinforced concrete statuary could be reproduced. Stephanie Taylor, a local artist, sculpted the two human figures from moss so that a mold could be created and installed on the original location. The monumental main doors were also replicated by Burnett & Sons, a local sawmill and lumber company, and coated with aluminum siding by Capital Sheet Metal.

The 22,800 square foot extension that houses the state-of-the-art planetarium, classrooms, offices, and a cafe presented its own set of unique requirements. Due to the sandy soil on the shore, Otto had to drill over 90 displacement piles 85 feet deep, with level beams and pile caps connecting them all together. Otto also poured and hardened 24 tilting wall panels on site, the largest of which weighed 54 tonnes. Each panel was lifted by a crane and put in place and all panels were installed in just two and a half days.

The steel ring that serves as the base of the planetarium had to be positioned exactly at an inclination of 5 degrees and a rotation of 5 degrees. The exterior dome consists of structural steel, double-layered metal stud walls, one layer of decking and two layers of plywood covered with zinc panels. The inner dome has been insulated and features two layers of dens and an acoustic spray for sound.

This project has been a big undertaking, revitalizing a historic monument that will have a positive impact on Sacramento and visitors from other communities. Children will have the unique opportunity to learn more about science, technology, engineering, art and math, which can motivate many to embark on a future career in STEAM.

Allison Otto is President and CEO of Otto Construction and is the third generation in the family to lead the business, overseeing the strategic direction of the business, including client outreach and negotiation, identification and acquiring new clients, maintaining relationships with current and past clients, and overseeing projects from an executive perspective.

Stay up to date on business in the Capital Region: Subscribe to the Comstock newsletter today.