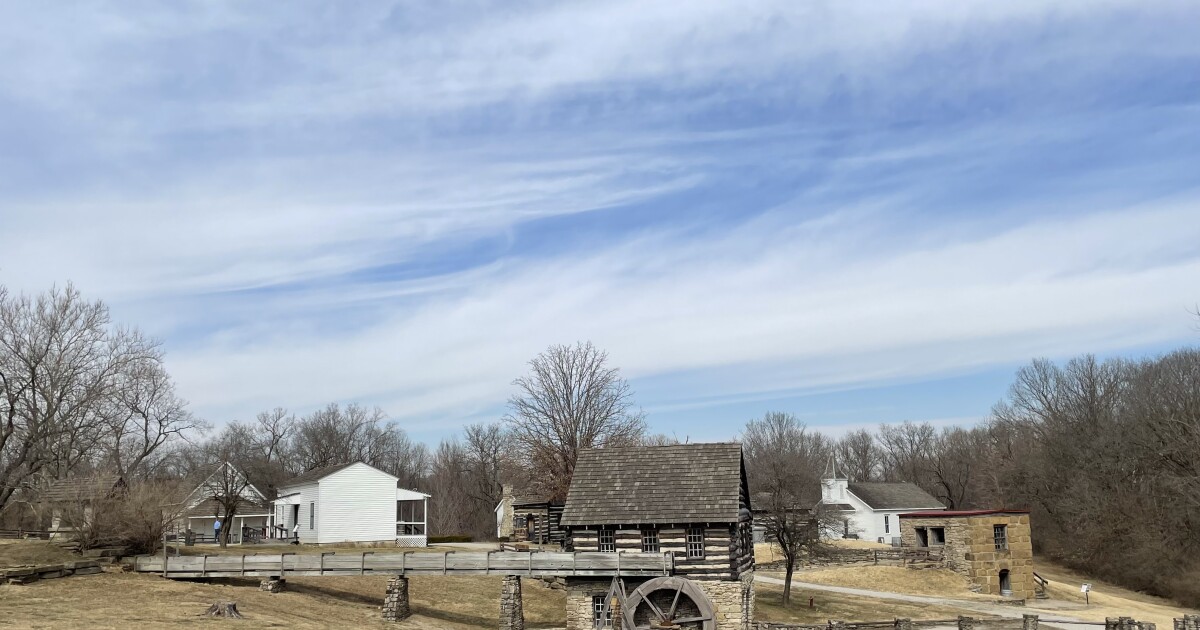 Ghost Towns Are All Around Kansas City, If You Know Where To Look | KCUR 89.3

This story was first published in KCUR’s Creative Adventure newsletter. You can sign up to get stories like this delivered to your inbox every Tuesday.

If you think of rows of abandoned clapboard storefronts, overgrown weeds, and withered residences along a hail-scarred dirt road, the term “ghost town” might seem a little misleading.

Around the Kansas City metro area, you can travel through the shadow of an ancient city without even realizing it. Some have been swallowed up by urban expansion. Others declined when fortunes turned. Some are just a short walk from the main road, while others have returned to the land on which they were built.

Not all ghost towns are necessarily empty shells. Generally, the term ghost (or dead or extinct) town is a place that was once prosperous but has since changed in some essentials: the population has decreased, the town has been annexed, buildings have been destroyed by fire, flood, plague or eminent domain. Some places that qualify as ghost towns may have 100 or more residents.

However, research by Daniel Fitzgerald of the Kansas Historical Society includes over 6,000 “ghost towns” in Kansas. In “Ghost Towns of Kansas,” published as a two-volume traveler’s guide in 1988 and 1994, he estimated that if each of these communities had survived, you couldn’t travel 12 miles through Kansas without visiting a city – a very different situation. reality than the clear skies and open spaces we know today across much of Kansas.

While there may only be scattered remnants and memories left, we’ve selected a handful of nearby ghost towns whose legacies inspire curiosity.

Founded in 1856 by East Coast abolitionists, free blacks and members of the Wyandot tribe, Quindaro is perhaps the epitome of Kansas City area vanished towns. It was a ferry ride and a stop on the Underground Railroad, but the town didn’t last long, shrinking even before the Civil War.

The neighborhood is still called Quindaro. There’s a panoramic view and audio tour of the area, with restricted access to the ruins (where the city’s foundations still stand) and the old cemetery, perched on a bluff overlooking the Kansas River.

The area was also the home of Western University, which was founded in 1857 as the first HBCU west of the Mississippi River and closed in 1943.

Nearby, the Quindaro Underground Railroad Museum is housed in the Vernon Multipurpose Center, a former elementary school designated as a Kansas State Historic Landmark in 2004. KCUR’s Luke X. Martin reported on Quindaro’s role in helping slaves to escape to freedom, and the dream of turning the National Memorial Site into a historic tourist attraction.

Just across from downtown Kansas City, nestled under the Hannibal Bridge, is the hamlet of Harlem, one of the first settlements in the region. Northland News reported that in 1913 the oldest resident said of the city, “Harlem was Harlem when Kansas City landed at Westport.”

The small ferry port was there in 1822, but after a devastating flood in 1951 and decades of industrialization, only a few homes and businesses exist today.

KCUR explored the city of Harlem in a 2015 story. Sadly, the 115-year-old Harlem Baptist Church, the community’s last relic, was severely damaged by fire in 2021.

Little remains of some communities, but the clues are there in the names of streets, parks, and sometimes a handful of protected (or just lucky) historic buildings.

Foot-to-foot was a town south of Westport, founded in the 1850s. First inhabited by enslaved and free black people, it is now part of the African American Heritage Trail. In 1933 Steptoe Street was renamed W. 43rd Terrace. St. James Baptist Church, which was founded in 1883 with the current building erected in 1939, still stands and is listed on the Kansas City Register of Historic Places.

There are a few historic homes left, though the neighborhood is wedged between the ever-expanding St. Luke’s Hospital and the nightlife of Westport. The sidewalk tiles spelling “Steptoe” that once meant city borders are gone.

The neighboring towns of Dodson and Marlborough were once just south of the city limits, but were absorbed in the 1940s. Founded in 1888, Dodson’s history is explained in an article for the Martin City Telegraph by local historian Diane Huston. Three buildings (built circa 1912) remain on 85th and Prospect Avenue, the center of the business district.

Marlborough, although never an incorporated town, began in the early 1900s and was hailed as a bustling growth community in the 1920s. Its main street (now The Paseo) is home to still buildings from that boom period, although many are vacant. The Marlborough Community Coalition is working to restore vibrancy to the area.

A few historical markers in the area offer insight into the unique communities that dot the region. North of the river, a milestone near Barry School commemorates the City of Barryfounded in 1829.

Lindenfounded in the 1880s, became Gladstone in 1952. Linden’s original public park is now known as Central Park and remains a focal point of the community.

Progress has opened up possibilities for some and spelled death for others. The river first invited settlement, along with river trade and ferry ports, but flooding left these communities vulnerable. Trails, bridges, railroads, automobiles, and air travel have changed the way we navigate our spaces.

The city of Hampton was a farming community in Clay County, one of many small settlements and farms annexed by Kansas City International Airport. Among the fields, only the name of the road and the cemetery remain. But from these relics was born the Heart Forest, a project from the mid-1990s, a symbol of Kansas City still observable today from the air.

People have literally changed the course of the river, the lay of the land and our relationship with our environment. A collection of small towns south of Lawrence, Kansas were squeezed out when the US Army Corps of Engineers created Clinton Lake.

The Wakarusa River Valley Heritage Museum shares these stories near the ancient city of Bloomingtonfounded by abolitionists in 1854. Most of the city’s land is underwater but is commemorated as Bloomington Beach, now the site of summer fun.

The museum is open from May to October. This season, the featured exhibit is “Remembering Richland,” featuring images, artifacts, and stories from those who grew up in the area. Near the museum and Old Town, artist Stephen Johnson has created the Freedom Rings art installation, featuring large golden circles representing these 10 communities.

Often the only remaining sites of a community are a school, church, or cemetery.

The museum is housed in a former fire station (open to visitors by appointment) and the historical society has organized a driving/biking tour of these locations, linking the towns and remaining historic buildings and sites. This self-guided tour takes approximately 90 minutes by car, the route winding along train tracks taking you through rural scenes, suburban subdivisions and industrial parks, demonstrating how separate and self-sufficient these communities were in the days of the horses and buggies.

Lecompton, Kansas, is near Lawrence along the Kansas River. Originally called Bald Eagle because of the many eagles along the waterway, it was named the territorial capital of Kansas and later the county seat. But when she lost the seat to Lawrence, the population dropped sharply. Historically, losing a political seat or a railroad bid was often the beginning of a city’s decline.

Admittedly, it’s a bit of a stretch to call Lecompton – which still has around 700 residents – a “ghost town”. There’s a short stretch of shops in the middle of the residential area, as well as a collection of historic buildings, including Hall Built in 1856, it’s the oldest wooden building in Kansas.

The city is home to two museums dedicated to Lecompton’s role in Kansas and Civil War history and has historical markers pointing to significant sites, with the tour narrated by Lecompton students.

If you want to experience that ghost town vibe without leaving the subway, visit the Shoal Creek Living History Museum in Northland’s Hodge Park on weekdays when buildings are closed and the grounds are deserted. Founded in 1975, the recreated town is a collection of historic buildings in the area dating back to the 1800s, which have been relocated and renovated to the finest period detail.

The park, open from dusk to dawn, is free to visit except during special events when re-enactors re-enact scenes from the early days of Clay County. The only permanent residents here are a small herd of bison in their pasture.