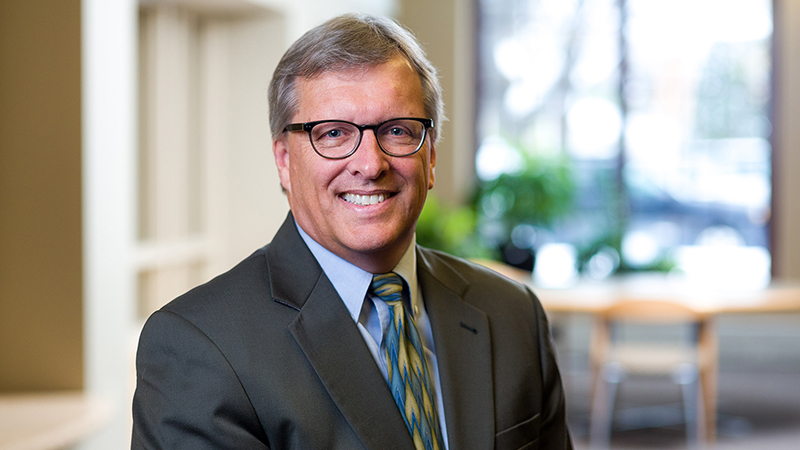 During his time as a faculty member at Hamline University – and later Mitchell Hamline – law schools, Butterfoss found himself elevated – sometimes drafted – to leadership positions, including several years as dean. by Hamline Law. But he always felt the pull of the classroom, avoiding a long career in administration to return to his teaching jobs.

A well-known professor of contracts, criminal law and criminal procedure – who notably made several appearances in local media to comment on various news stories of the day – Butterfoss retired this month after nearly 40 years of legal training.

“Ed has given so much to the legal community in Minnesota and beyond,” said President and Dean Anthony Niedwiecki. “In addition to the thousands of students he has taught, Ed has always risen to leadership positions when called upon, and his ability to work with anyone has allowed him to succeed every time.

“He helped Hamline Law grow, which helped Mitchell Hamline become the law school it is today.”

Raised in New Jersey, Butterfoss earned an undergraduate degree in accounting — and played on her college football team — before heading to law school. After graduating from Georgetown Law, he practiced for three years in Philadelphia before joining the faculty of Hamline Law in 1983 as an assistant professor.

“At that time, our school was barely 11 years old and not very well known, so it was a leap of faith to come to Hamline,” said Professor Marie Failinger, who started at the faculty of right the same day as Butterfoss. “If I remember correctly, it was kind of a culture shock for him to come from the East Coast to Minnesota, which was predominantly white. So one of his first and longest efforts was trying to bring more racial diversity to Hamline.

“I went to any event and talked to whoever I could,” Butterfoss said. “People were incredibly welcoming and eager to help. I think we’ve done a lot of good work over the years, especially in diversifying the student body.

Much of Butterfoss’ efforts were in partnership with the Minnesota Minority Lawyers Association, which presented the school and Butterfoss with its Distinguished Service Award in 1989. “To me, this is the most important job I have done,” he added.

Page from The Oracle, Hamline University’s student newspaper, from September 1998, including an article announcing Butterfoss’s appointment as Dean.

In the 1990s Butterfoss was sought out for a leadership role, serving as Associate Dean for Academic Affairs from 1995 to 1998, before being appointed Dean of Hamline Law. He served for five years. During her tenure, Hamline Law started a program that allowed students to attend on weekends — an idea born out of a conversation with a student, according to Butterfoss. At the time, it was only the second such program in the country. Hamline Law also gained a national reputation for its alternative dispute resolution program during Butterfoss’s deanship.

But it is his sympathetic leadership style that most of his colleagues of the time remember. “Hamline Law School had no better dean than Ed,” said professor emeritus Carol Swanson, who served as associate dean during her deanship. “I knew Ed was a rare unicorn among law professors and especially deans, possessing endless humility and common sense. An outstanding problem solver, Ed most often cuts to the chase with surgical precision.

“Ed was a caring leader who treated everyone fairly when he was our dean at Hamline,” said Professor David Larson, who started at Hamline the year Butterfoss became dean. “It’s no surprise that he’s always been an effective and popular teacher because, to put it simply, he’s a really good person.”

Butterfoss resigned as dean after the 2002–03 school year to return to teaching after what had been eight years in administrative positions. A group of alumni, faculty, and staff created a Diversity Scholarship in his name, which is still awarded annually to an incoming student.

But the calls for a return to leadership never quite stopped.

When Lucinda Jesson, then director of the Health Law Institute in Hamline, was appointed chair of the law school’s dean’s search committee in the late 2000s, the responses she heard most from faculty , staff, students and alumni were: “Will Ed Butterfoss be Dean again? ?” and “Hire someone like Ed.”

“In my five years at Hamline, I have never come across a student, staff member, faculty or alumnus who didn’t have good things to say about Ed Butterfoss,” said Jesson, who is now a judge on the Minnesota Court of Appeals. “He arrived on campus with boundless optimism and energy every day, and that optimism shone through in every interaction with him.”

While Butterfoss served a later stint as associate dean – from 2010 to 2012 – he always saw himself as a teacher first. He was known to often cycle to work and host Kentucky Derby parties. And Butterfoss has coached more than 50 teams in local recreational leagues — commenting once there were few kids in the Macalester-Groveland neighborhood of St. Paul he hadn’t coached in some sports.

“Ed Butterfoss was one of my favorite professors in law school because of his genuine enthusiasm for law and his way of making everyone in his class feel included and worthy of being a future lawyer,” said John Choi, a 1995 alumnus of Hamline Law who is now a Ramsey County attorney and administrator of Mitchell Hamline.

“Above all, his service to the wider community and his commitment to improving the quality of justice in our state is a legacy that we should all seek to emulate in our professions.”