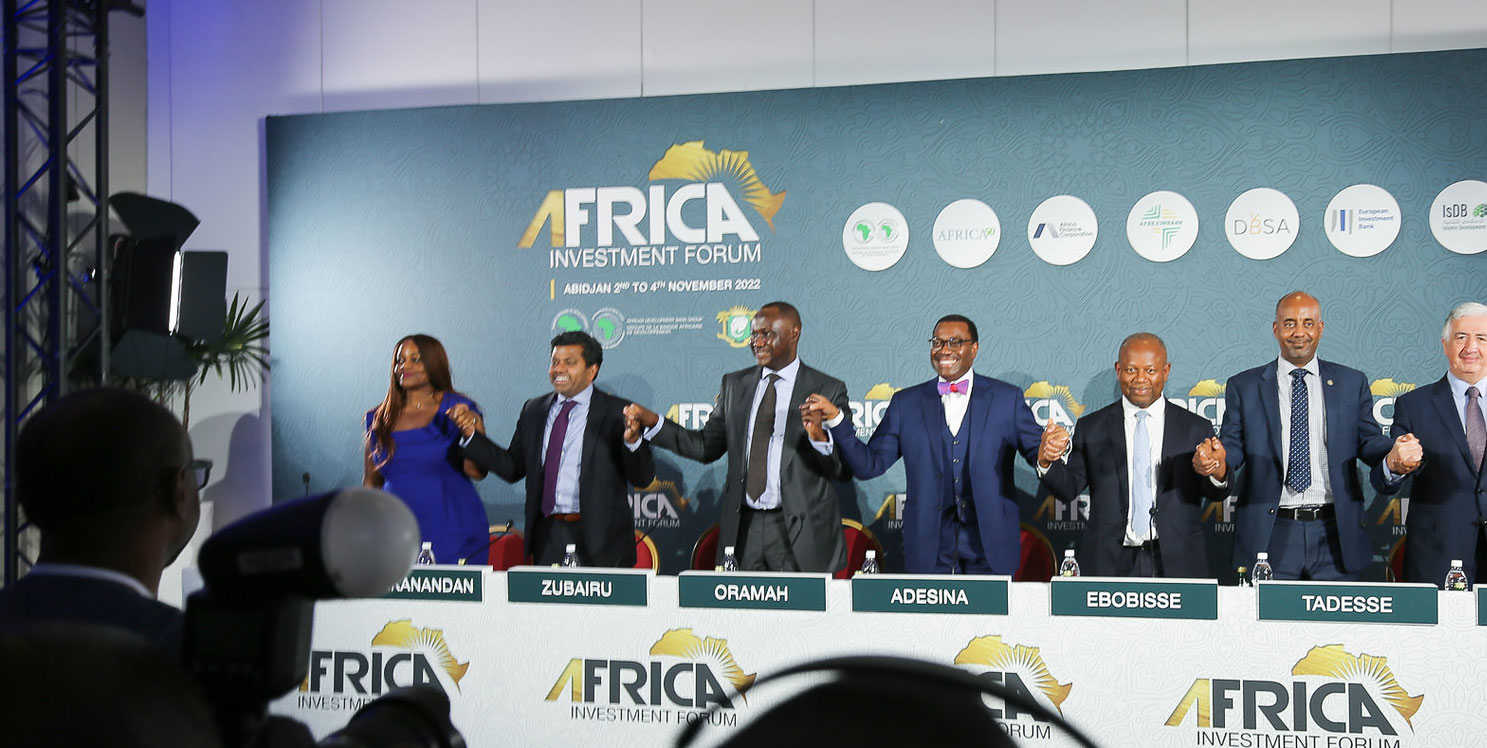 Development finance institutions in Africa have warned governments against using countries’ natural resources to support infrastructure lending, as this means mortgaging their future with creditors. Instead, they want states to explore public-private partnerships to fund their development projects.

At a press conference in Abidjan, Côte d’Ivoire, during the Africa Investment Forum, the heads of eight multilateral financial institutions in Africa said that most states on the continent were heavily indebted and that the volatility of the global economy was aggravating their debt situation, hence the need to borrow slowly to explore cheaper ways of financing development.

Led by the African Development Bank (AfDB), the organizer of the Africa Investment Forum, they vouched for the creditworthiness of the continent, noting that Africa has done well to repay its infrastructure loans.

Dr. Akinwumi Adesina, President of the AfDB, noted that Africa has the lowest default rate on infrastructure loans in the world, at 5.5%. The largest defaulter, according to Moody’s Analytics, is Latin America at 12.9%, followed by Asia at 8.8%, Eastern Europe (8.6%), America Northern (7.6%) and Western Europe (5.9%).

“We have to start looking at infrastructure as an asset for us. The question of investment risk in Africa is exaggerated. The issue is not the risk, but the risk-adjusted return and how you manage the risk,” Dr. Adesina said.

The lenders have pledged to work with African governments to build the continent’s capacity in agriculture, renewable energy and electric car manufacturing.

On agriculture, they will support special agro-processing zones across Africa to make agriculture a wealth sector.

On electric cars, banks are looking to finance value chains for minerals making parts and batteries like nickel, cobalt and lithium.

“We are going to pool our resources, technical resources in terms of technical assessment, our project development capacity here, our co-financing capacity here with others to be able to develop battery value chains on the continent and attract investors to manufacture the cars,” said Dr. Adesina.

In energy, the institutions plan to invest 20 billion dollars to build 10,000 megawatts of solar energy in 11 countries, which will supply electricity to 250 million people.

“There is an over-concentration of solar panel manufacturing around the world. As Africa tries to maximize and optimize renewable energy – we have 11 kilowatts of solar power – so we have collectively decided that we will support the design, support and planning for the manufacture of polysilicon and solar panels said Dr. Adesina.

They are also pushing the International Monetary Fund (IMF) to channel Special Drawing Rights (SDR) money through them for infrastructure development.

“The world is going through all kinds of challenges right now. The big one, of course, is climate change, Covid-19, the war in Ukraine and what it has done in terms of energy costs, in terms of food prices, inflation… we have a big deficit funding for infrastructure and there is not a lot of money on the table to support developing countries. Special drawing rights are one of the ways to solve this problem,” said Dr Adesina.

The IMF has issued $650 billion in special drawing rights in 2021, which is the highest it has ever issued. But Africa only received $33 billion of that amount.

Multilateral donors have advocated for SDRs to be granted to them to finance growth and poverty reduction programs on the continent.

“I commend the efforts of the IMF for the resilient trust they have, which is great. However, transactions in SDRs will be individual, while multilateral development banks like ours will actually be able to invest the money in SDRs. Now for us $1 SDR will become $4 for the country So if you have $10 billion it becomes $40 billion $20 billion becomes $80 billion So that’s leverage This is very important for the SDR to complement the efforts of the IMF.

“And I think that’s important because when we look at global challenges, we have to ask ourselves: what’s the best way to optimize the global financial architecture, from the IMF to the multilateral financial institutions? If we leverage the SDR fourfold, that’s money we can use to recapitalize and support the Development Bank of South Africa, Africa Finance Corporation, Africa50, Trade Development Bank, Islamic Development Bank and others.

But they called for transparency and accountability in infrastructure funding spending.

“It’s not just how much money you put into infrastructure; it is the efficiency of these expenditures.