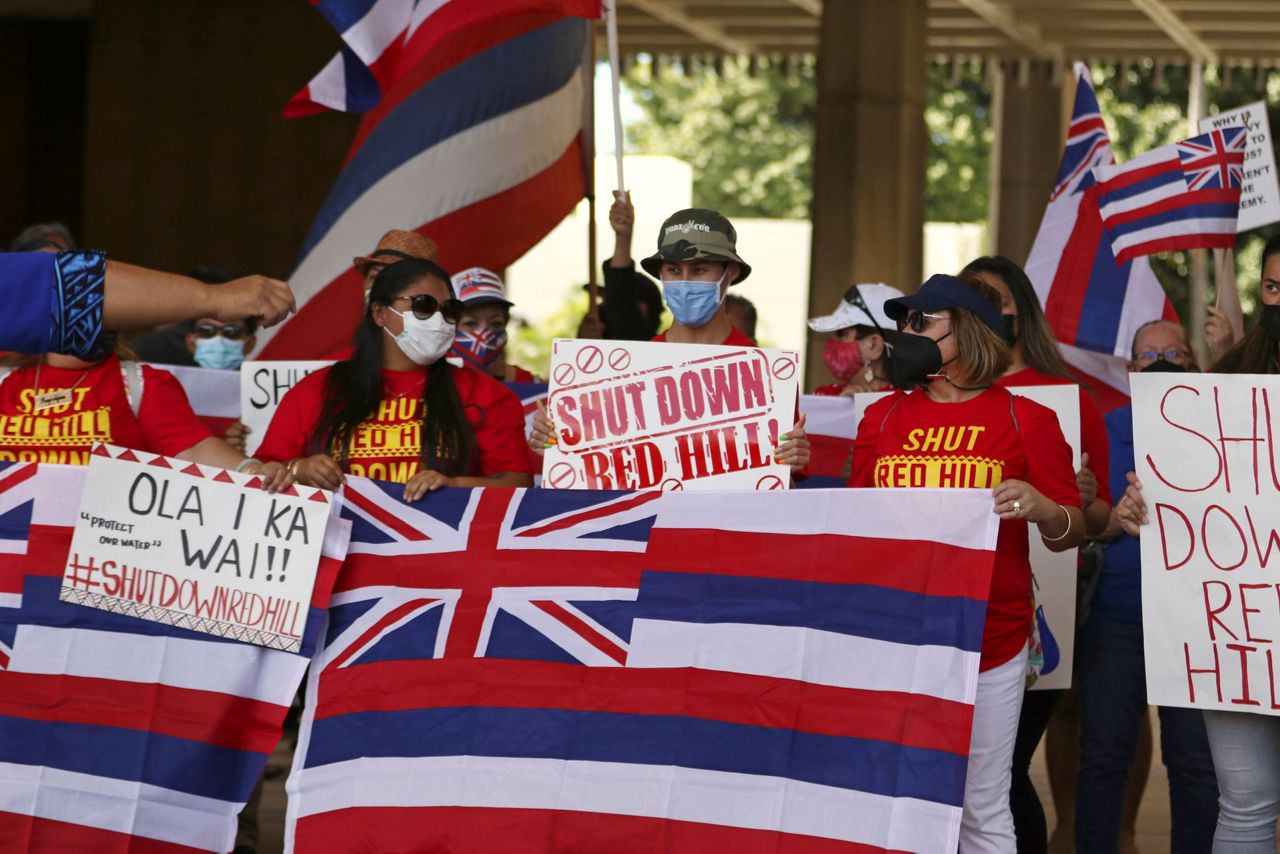 Native Hawaiians revere water in all its forms as the embodiment of one of the four main gods of the Hawaiian pantheon.

The resource is so precious that having it in abundance is synonymous with prosperity. The Hawaiian word for water – wai – is repeated in the word for wealth – waiwai.

So when the Navy confirmed that oil from one of its fuel tanks had leaked into Pearl Harbor tap water, many native Hawaiians were not only worried, they were hurt and offended.

“This is the most flagrant attack on a public resource in Hawaii’s history,” said Kamanamaikalani Beamer, former trustee of the Water Resources Stewardship Commission.

Nearly 6,000 people, mostly those living in military housing at or near Joint Base Pearl Harbor-Hickam, fell ill after water containing petroleum spilled from their taps late in the year. last. Residents fear fresh water for all of Oahu is also at risk, as the aging reservoir system sits above an aquifer that provides drinking water to most of the island and has a history of leaks.

The navy is working to fix the problem. But many say it has deepened a distrust of the military that dates back at least to 1893, when a group of American businessmen, backed by US Marines, overthrew the Hawaiian kingdom. More recently, Native Hawaiians fought to stop targeted bombings on Kahoolawe Island and in the Makua Valley west of Oahu.

“The military has a long history of mismanaging Hawaii’s natural and cultural resources,” Carmen Hulu Lindsey, chair of the board of directors for the Office of Hawaiian Affairs, said in an email in response to questions. “Time and time again, the people of Hawaii have had to clean up after the military ravaged our sacred lands – from unexploded ordnance and toxic waste to the loss of cultural and historic sites and endangered species – without even appropriating resources to fund these efforts.”

For some, water contamination was the last straw.

The crisis has “shaken people’s faith in the military,” said Kawenaʻulaokalā Kapahua, a Hawaiian political science doctoral student and one of the activists who pushed for the closure of the tank facility.

“I think it’s really pushing people over the edge because we all need water to live,” Kapahua said. “And I think that’s a very scary thought for people that their children or their grandchildren will never be able to drink the water that comes out of the tap.”

Navy officials seemed aware of the mistrust when they told members of Congress in January that the Navy would not continue to fight Hawaii’s order to dump the tanks.

“I understand the deep connection the people of Hawaii, especially the Native Hawaiian community, have with the lands and waters of Hawaii,” said Rear Admiral Blake Converse, Deputy Commander, U.S. Pacific Fleet, while noting that he lived in Hawaii. and for more than eight years.

Rear Admiral John Korka, commander of Naval Installations Engineering Systems Command, also highlighted his connection to the islands, sharing the church he worshiped at and the Catholic school his children attended when he lived in Hawaii. “This is a personal issue for me, and I’m sorry.”

Many see value in the state’s relationship with the military, which also provides civilian jobs seen as desirable alternatives to service work in the tourism industry.

Hawaiian Vietnam War veteran Shad Kane said he was troubled by the contaminated water, but it didn’t test his faith in the military. His trusty pickup truck bears special Hawaiian license plates indicating he is a combat veteran. He plans to transfer the plates to his new Toyota Tacoma.

“Yeah, that bothers me, but I also know the Navy has a greater responsibility,” Kane said. “The Navy wants to do the right thing.”

The Navy has not determined how the oil ended up in the water. Authorities are investigating a theory that kerosene spilled from a ruptured pipe last May and somehow entered a fire suppression system drain pipe. They suspect that fuel then leaked from the second pipe on November 20, sending it into the drinking water well.

The Navy attempted to clean the oil from the contaminated well and pump it out of the aquifer. Officials are also dumping clean water into the Navy Water System – which serves 93,000 people in homes and military offices in and around Pearl Harbor. In the meantime, the Navy has accommodated the families of affected service members in hotels in Waikiki.

Beamer, the former water commission administrator, had been calling for the tanks to be decommissioned since 2014, when more than 27,000 gallons (102,200 liters) of fuel leaked from one of the tanks.

The Navy “promised us that nothing like that would happen,” he recalls. “They would never risk the lives of their loved ones. … They drink from the same aquifer.

After initially resisting, the Navy said in January it would comply with Hawaii’s order to remove fuel from the tank, which is used to power many US military ships and planes that patrol the Pacific Ocean. But in February, the Navy appealed in court.

Rear Admiral Tim Kott, commander of Naval Region Hawaii, said in a statement this week that Navy officials will continue to work with, listen to and learn from the Native Hawaiian community.

“We know we have a lot of work ahead of us to earn the trust of communities across the island, and especially Native Hawaiians,” he said. “We will continue to work tirelessly to restore community confidence and clean water for our families and neighbors.”

U.S. Representative Kaiali’i Kahele, a combat pilot who serves as an officer in the Hawaii National Guard, invoked the Hawaiian word hewa, which can mean sin or wrong, to describe Navy water contamination. He also called it “a crisis of astronomical proportions”.

He traces the roots of his native Hawaiian family to a small fishing village near the southern tip of the Big Island of Hawaii, where there is no running water and residents depend on rain.

The ancients taught him that every drop is precious.

“All life is born from clean, fresh water,” Kahele said.

Copyright 2022 The Associated Press. All rights reserved. This material may not be published, broadcast, rewritten or redistributed without permission.

What does it mean to be multiplanetary for life here on Earth? — MIT Media Lab