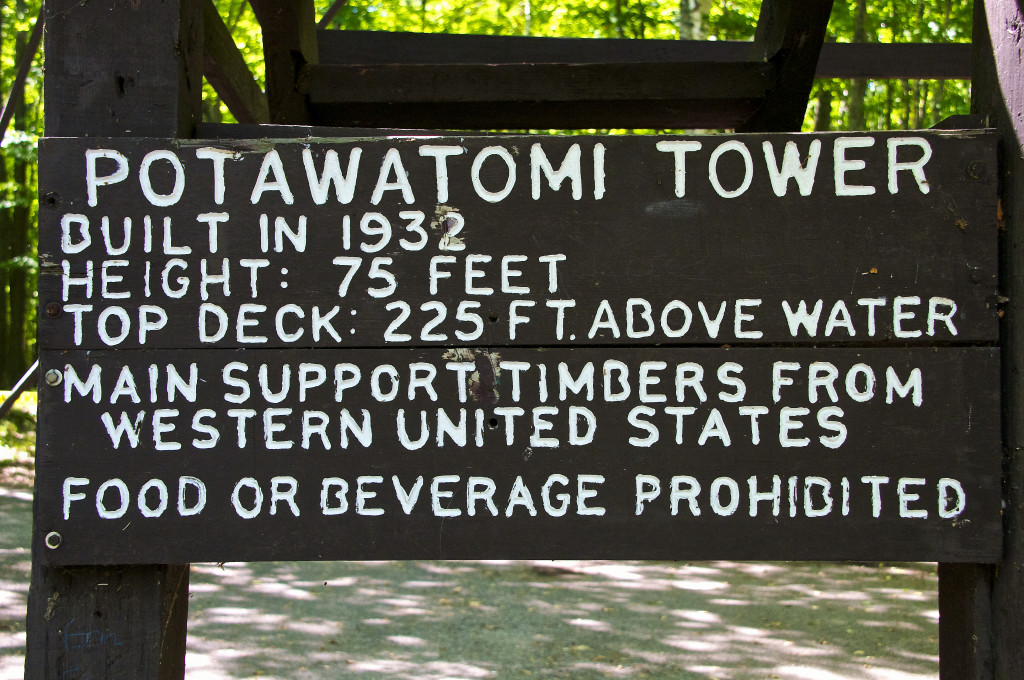 Potawatomi Tower has been in the park since 1932, but has been closed since 2018. While studies continue on the historic structure, no repairs are in sight. File photo of Len Villano.

Decisions to come after the November elections

The latest action on the Potawatomi State Park observation tower announced Tuesday by Gov. Tony Evers’ office has been met with skepticism by those who suspect another planned delay to a project that has already been stalled to the detriment of the struggling turn – and this time safely past the legislative and gubernatorial election bump in November.

“They leave it to rot in the woods while they study it to death,” said Christie Weber of the Sturgeon Bay Historical Society Foundation (SBHSF), the organization that led the effort to save the structure.

“This is nothing more than an attempt to delay the restoration of the tower to the point where it can no longer be restored,” said Dave Allen, founder of the Potawatomi Park Alliance, an organization he formed earlier. early this year.

The action announced was a request for professional architectural and engineering design services to provide the Wisconsin Department of Natural Resources (DNR) with construction administration services for the revitalization of the tower.

With a project budget of $25,000, pre-design services would include the development of two 10% concept plans, with detailed cost estimates for both. The first concept is to examine the existing conditions of the tower and provide a conceptual plan for the historic restoration of the tower. The second would provide a concept plan for a tower built with new materials that reflect the historic character of the current tower.

With both concept plans, the tower is to be fully accessible at all viewing levels to all park visitors, including those with physical disabilities, according to the RFP.

“It’s clear that people want to see a restored or rebuilt tower at Potawatomi State Park,” Evers said in the release announcing the RFP. “We also recognize that accessibility is a critical consideration for any construction project, especially one as valuable as the Potawatomi Tower.”

“The feedback we’ve received and the overwhelmingly positive public response to the fully accessible Eagle Tower at neighboring Peninsula State Park reminds us of the importance of improving access to our outdoor activities,” Cole said in a statement. “We look forward to continuing this important work in Potawatomi.”

The state’s request for the RFP follows a public comment period the DNR held earlier this year about what people wanted to see happen with the tower. A total of 361 people submitted comments online, via email or in a Zoom meeting on February 22. An overwhelming majority of people were in favor of saving the tower, according to the summary of comments provided by the DNR.

“It was crucial for us to hear from the public regarding the future of the Potawatomi Observation Tower, and we thank everyone who took the time to weigh in,” Cole said in a statement. “The department recognizes the importance of the tower to visitors to Potawatomi State Park and the surrounding community.”

Proponents of repairing the tower have always maintained that maintenance repairs performed on the historic structure do not trigger ADA (Americans with Disabilities Act) requirements. They also say that access to the views offered by the tower for those who cannot climb it could be handled separately.

“The vast majority of citizens who weighed in on this issue at the DNR appeal event and via Survey Monkey want the current tower restored,” Allen said. “Even those who recognized the importance of accessibility also didn’t want accessibility to stand in the way of restoration.”

According to DNR’s own data from the comment period, only 50 of the 361 people who commented supported making the existing ADA tower accessible (see attached chart).

Neither the DNR nor the governor’s office announced that they had ordered the tenders. The public was only made aware of the most recent development through the April 12 press release, which was issued the day after the April 11 deadline for companies to submit their proposals.

Sarah Hoye, director of communications for the DNR, said the contract was still open so they could not reveal which companies had bid for the job. This information will be available in the future from the Department of Administration.

According to the RFP schedule, the final design and construction dates were to be “to be determined”. Before that, the company would be selected this month and the project would start in May, with the concept report completed in December 2022.

“I don’t think it’s a coincidence that it’s after the election,” said Rep. Joel Kitchens (R-Sturgeon Bay), whose efforts to fix the tower have been blocked by the DNR several times over the past few years. past two years, and who released a statement responding to Evers’ statement.

“They are not sincere in any of their efforts. I see it more or less like that,” Kitchens said. “They’re just pretending to do something.”

Evers said in his press release that his action was necessary because the legislature had not provided funding or direction. Sen. André Jacque (R-DePere) hit back, saying the administration blames it for its failure to restore and preserve the tower.

“Money is not an issue,” said Jacque, who is a member of the State Building Commission. “The current state budget, which the governor signed into law last summer, includes more than $200 million for state facility maintenance projects — not to mention all the federal money from the state. ARPA that it distributes statewide. The DNR could have submitted a request to the Building Commission at any time, but they did not.

Kitchens drafted a bill earlier this year that sought American Rescue Plan Act (ARPA) funds to repair the tower and although the bill had a hearing in November 2021, it did not. was put to the vote.

The tower was closed for the season in December 2017 and officially closed in the spring of 2018 after routine inspections determined it was unsafe for public access. Since then, three studies have been performed on the tower: the first commissioned in 2018 by the DNR with the USDA Forest Products Lab in Madison; the second commissioned in 2019 by the SBHSF with Wood Research and Development; and the third commissioned in 2020 by the Department of Administration to review previous reports and provide an assessment of the tower with possible options to address security issues.

The request for state concept plans “is to provide the department with a course for the revitalization of the tower,” according to the governor’s press release. But those in the know have noted the careful wording of the RFP which signals that historic preservation is not necessarily a priority for MNR.

“The project does not involve federal funds or require federal permits and is therefore not subject to Section 106 of the National Historic Preservation Act,” the request for proposals to bidding companies states. Still, the RFP goes on to say that “this requirement will need to be revisited if the sources of funding for the construction of the project change.”

Section 106 requires that if it is “possible” to save a historic structure, it must be saved. If the stalling tactics push the tower into an “irreparable state, they beat that word ‘doable,'” Weber said.

So while Evers and Cole have said they are “committed to making progress on Potawatomi Tower,” those who have fought to repair the structure see more willful neglect and, Allen said, they “urge Governor Evers to order the DNR to restore the tower immediately.