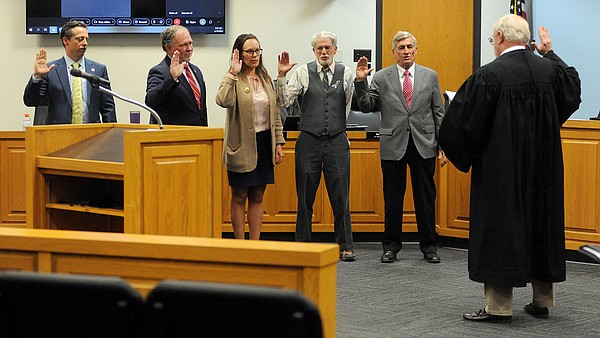 A new Jefferson City Council member, along with re-elected incumbents, was sworn in Monday — just in time to approve city staff’s plan to seek redevelopers for more than a dozen properties along East Capitol Avenue .

Kicking off the new council was a memorandum from City Attorney Ryan Moehlman that outlines how city staff plans to reassess the structural integrity of several properties in the Capitol Avenue neighborhood’s Conservation Overlay District, as well as d obtain commitments from potential redevelopers.

Unanimously approved by council on Monday, the plan states that city staff would request a third-party structural assessment on more than a dozen properties in the Capitol Avenue area that were recently declared unsafe and slated for demolition. or repaired.

City staff found the properties at 114 Jackson St. and 429 E. Capitol Ave. were dangerous but could be repaired.

It could take three to six months to get the buildings structurally assessed, said Sonny Sanders, director of the City of Jefferson’s Department of Planning and Protective Services.

The city council would use the structural assessment to determine whether the buildings – all owned by resident Barbara Buescher – could be rehabilitated or should be demolished, as part of the plan.

The city would open a “call to interested parties” to the public for properties that the council says could be rehabilitated. Interested parties would be required to enter into a bid bond agreement and deposit no more than one percent of the estimated rehabilitation cost or $5,000 in escrow with the city for each property they wish to acquire. The agreement would stipulate that if the city acquires the property, the interested party guarantees that it will submit a proposal for the property which includes a redevelopment plan and a purchase price.

If the city goes through the eminent domain process and becomes the owner of the property, the city will solicit redevelopment proposals from interested residents and organizations.

If an interested party does not submit a redevelopment proposal, the party would forfeit the escrow deposit to the city.

If there is no bid bond agreement or interest in a property, Moehlman said, the city would proceed with demolition.

“It’s about balancing the interest between acquiring properties, resolving the most dangerous and negative buildings for the neighborhood, and also identifying properties that, although badly affected and in poor condition , may still be viable for redevelopment by a developer,” Moehlman said.

City staff will seek contracts for properties that council says should be demolished immediately. The city is already planning to demolish 104 and 108 Jackson St. using federal funds because of their high risk to life safety.

It will be more expensive for the city to acquire properties that have buildings than to demolish the buildings and then acquire the vacant land, Moehlman said.

Some council members said they wanted to save historic properties, but also needed to be mindful of how they were spending taxpayers’ money.

Moehlman added that the city invests taxpayer dollars in these properties each year due to nuisance reduction, responding to property crime, and property closures.

Earlier this month, council approved the setting aside of $575,000 to fund the possible demolition of all 12 properties and the repair of two properties. The funds also covered other financial obligations to the Jefferson City Housing Authority for the acquisition of properties along East Capitol Avenue.

Before the city demolishes a structure using the $575,000, city staff must present council with a plan to identify individuals or organizations who are willing to commit to rehabilitating structures in the overlay district of conservation of the Capitol Avenue neighborhood. Municipal staff must also submit a plan identifying hazardous buildings for which deferred demolition is not recommended.

In other business on Monday:

• Council discussed a $141,140 contract with Engineering Surveys and Services to design a replacement bridge over Ohio Street, located in Washington Park between Louisiana Avenue and South Boulevard, which crosses Wears Creek.

At the March Jefferson City Public Works and Planning Committee, city staff said the estimated cost to build the bridge was $750,000.

The Ohio Street Bridge has been closed to vehicular traffic since 2018, when a Missouri Department of Transportation inspection found it was continuing to deteriorate, resulting in a reduction in the bridge’s carrying capacity.

If approved, the city would use sales tax money to fund the project.

• City Council approved a $445,850 contract with Aplex Inc. to upgrade the storm water system around Douglas, Davis and Bolton Drives.

The project would include the construction of a stormwater system from Wayne Avenue, along Douglas Drive, to Davis Drive – intercepting water from the West Elementary School and the intersection Main Street West and Boonville Road. The project would eventually redirect stormwater that passed through the backyards of homes between Bolton and Douglas Drives, often flooding homes.

The city received $124,019 in grants from the Missouri Department of Natural Resources and will use the municipal sales tax stormwater allotment to fund the project.

• Council approved two bills that would authorize additional appropriations from the 2021-22 annual budget to the police department.

The first bill authorizes the department to use $48,556 from the Drug Forfeiture Justice Fund to purchase new software to maintain an electronic policies and procedures manual for the department.

The second bill authorizes the police department to use $33,031 in donations from the Jefferson City Animal Shelter to pay for five mobile data terminals — rugged laptop computers — and five electronic ticket printers to be installed in screening officers’ vehicles animals.