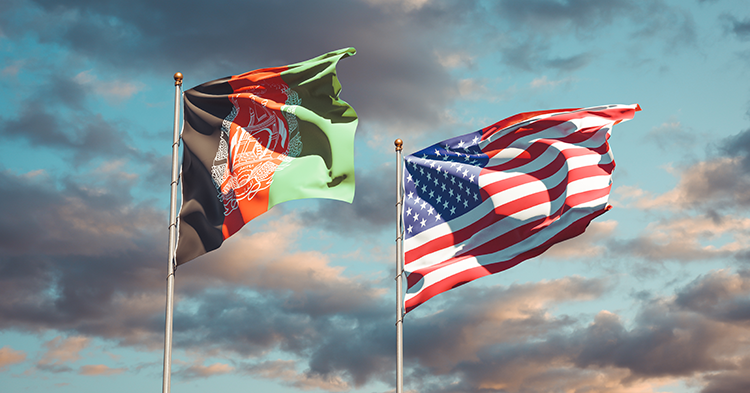 In the weeks following the one-year anniversary of Kabul’s fall to the Taliban on August 15, the ABA Journal highlights ABA’s efforts to help Afghanistan’s judges and lawyers relocate, get immigration benefits and get jobs through their legal skills. This is the first part of our series.

In early November, Michael Byowitz attended a virtual program called “Women Judges of Afghanistan: A Call to Action” and heard the harrowing stories of female judges who fled Afghanistan when the Taliban took control of their country.

The show, which was sponsored by the International Law Section’s International Human Rights Committee and included speakers from the International Association of Women Judges, also described the work of non-governmental organizations to help these judges first find temporary refuge in other countries before resettling in the United States.

“Towards the end of the program, I asked a question, and the question was: ‘What are these people going to do for work when they are resettled? How are they going to make a living? says Byowitz, an attorney at Wachtell, Lipton, Rosen & Katz in New York. “And I specifically asked if there was a way for them to qualify for jobs in the American legal profession, either as attorneys or in other law-related roles.”

He contacted ABA President Reginald Turner and Executive Director Jack Rives, who told him about the ABA Intervention Project in Afghanistan, an initiative of a group of entities, members and staff created in August 2021 to help address the growing humanitarian crisis. Byowitz shared her plan at one of her meetings and got the go-ahead from Nancy Stafford, then ILS president, to work with their colleagues to implement it.

Byowitz helped launch the Afghan Professionals Resettlement Task Force, which offered a pilot program to identify a small number of candidates interested in earning master’s degrees in law, taking the bar exam, and joining the American legal profession. In June, the Board of Governors approved the pilot program, which will focus primarily on Afghan women judges, prosecutors and lawyers.

“Afghan judges, prosecutors and lawyers are highly educated and trained people who have held positions of significant responsibility,” says Byowitz. “To use their skills in the best way for them and for the United States, we should have a program like this.”

Judge Lisa Walsh often speaks with female Afghan judges who live or plan to live in the United States.

“They did much the same work as me, but at their own risk,” said Judge Lisa Walsh of the 11th Circuit Court of Appeals Division in Miami. Photo courtesy of Lisa Walsh.

As IAWJ Regional Director for North America, she helped set up a portal where Afghan judges leaving their country could be matched with an immigration lawyer for advice or assistance.

Once the judges entered the United States, Walsh worked in her capacity as International Director of the National Association of Women Judges to connect them with mentors to help them relocate, invite them to conferences and introduce them. to other law-based organizations that might support their professional goals. She discussed these efforts with the Afghanistan Intervention Project, who suggested she join the Afghan Professionals Resettlement Task Force.

Telling the judges’ stories, Walsh — who also serves as liaison for the IAWJ and NAWJ at ILS — says many told him they lost everything in their frantic departure from Afghanistan. Some even said they left food on the stove because they heard the Taliban were coming for them.

“They did much the same job as me, but at their own risk,” said Walsh, an administrative judge for the 11th Circuit Court of Appeals Division in Miami. “Those who have done anti-corruption trials or narcotics trials or anti-terrorism trials, their trials have been televised all over the country. And even before the takeover, they received death threats. Some of their… family members were killed because they were related to them.

“They were ready to risk everything to carry out their duties,” she continued. “It’s unusual…I think because they are exceptionally brave individuals who really understand the values ​​we share, that’s why people are so inspired to try to help them.”

One of Walsh’s contributions is to provide the task force with insight into the lives of judges, she said. Most of them resettled in Virginia and California. Some are fluent in English, have master’s degrees and have studied outside of Afghanistan, in the United States or the United Kingdom.

Many of them also struggle to provide for their families, adds Walsh. She explains that Afghan judges start their jobs right out of law school and as a result they are often younger than American judges and also have young children.

“A judge who is in Alexandria has three small children,” Walsh said. “She is struggling financially and she has advanced degrees, not just her law degree, but an advanced degree.

“She said to me, ‘It’s my big ambition to get an LLM. No matter how hard it is, no matter how much it will cost and the effort and the lack of sleep, she doesn’t want to give up.

Dana Katz also participated in ILS’ November program, which was co-sponsored by its Women’s Interest Network and Middle East Committee.

“We’re like a start-up,” says Dana Katz, vice president of the Afghan Professionals Resettlement Task Force. “We are iterating as we go.” Photo by David Rosenblum.

Katz, outgoing president and senior adviser to WIN, heard of Byowitz’s idea to help Afghan judges rebuild their lives in the United States and jumped at the chance to get involved. Now vice-chair of the Task Force on the Resettlement of Afghan Professionals, she is working with Byowitz and other members to seek qualified candidates for the pilot program and obtain external funding and partner entities to support her initiatives.

The task force also plans to provide preparatory law courses as well as identify legal career opportunities that do not require passing the bar exam. This includes roles as paralegals, compliance specialists or immigration advocates.

“We’re a passionate group working together under Mike’s strong leadership to help our Afghan colleagues, and our pool of candidate judges and lawyers is growing,” says Katz, an attorney who lives in Connecticut. “We are like a startup. We iterate as we go. We are expanding our infrastructure and materials and hope to onboard more volunteers and get more people, law firms, foundations and corporations to donate so that we can help this community.

“We have secured commitments from seven law schools to provide as few as 11 and as many as 13 full scholarships,” says Byowitz, who adds that recipients will likely begin their LLM programs in the spring or next year. fall of next year. “There are a number of other law schools considering our request, and I have had preliminary conversations with an even larger group of law schools. I am confident that if we had 20 qualified applicants, we would get 20 full scholarships.

ABA members who want to support the pilot program can donate funds to help cover applicants’ housing and living expenses, Byowitz says. They can also volunteer to serve as mentors to Afghan judges and lawyers, who will need help navigating their educational programs and careers.

The task force is looking for additional ABA members to help with contracts or other projects and to join its network of immigration lawyers who will provide pro bono advice to Afghan judges and lawyers applying for permanent residency to Afghans. United States.