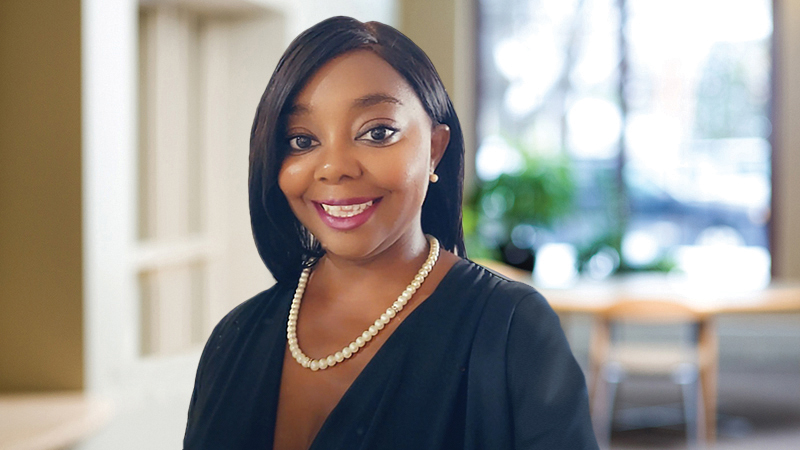 Brandy Johnson has wanted to be a lawyer since she was seven years old. But with a family to raise, she instead began her career elsewhere in the legal profession. Her first job as a legal assistant came after defending her spouse when he suffered an injury on the job. The attorney representing them offered Johnson a job.

It was in his hometown of New Orleans, and Johnson started working right after Hurricane Katrina. She stayed in the city for nearly two years, but eventually moved to Houston, where she began working as a paralegal and earned her bachelor’s degree.

For Johnson, Houston was “a space where we could continue to grow and put myself in a better position to take on my responsibilities.”

But once her kids graduated from high school, Johnson was ready to pursue her lifelong dream of becoming a lawyer. She applied to several law schools, but says Mitchell Hamline stood out because she felt a sense of ‘home and family’.

“The administration went above and beyond to make sure I wasn’t just a number,” she said. “They actively wanted me at Mitchell Hamline.” Unable to visit the school during COVID, Johnson says the admissions director used a cellphone to show him around campus after he expressed concerns about his family moving across the country.

Now in St. Paul, Johnson is a full-time student and treasurer of the Mitchell Hamline Black Law Student Association. She is also an Admissions Ambassador, where she can encourage other paralegals and people of color to attend law school. “I believe the legal profession is not very representative of the face of America,” she said. “It’s my goal to get more students of color to consider Mitchell Hamline and that’s why I wanted to be an ambassador. It shows other students of color that there is an environment where they can feel welcome. ‘easy.

In addition to attending Mitchell Hamline, Johnson is also an energy researcher at Winthrop & Weinstine in Minneapolis. She says her real-world experience as a paralegal helped her prepare for law school.

With plans to graduate in the spring of 2024 as her family’s first female attorney, Johnson hopes to focus on advocating for underrepresented and marginalized communities. His own background stems from the fact that his own mother “couldn’t sit in the seats I’m sitting in now” because of who law school was accessible to in the past.

This article was written by Marla Khan-Schwartz, a freelance writer in the Twin Cities, and first appeared in Quotes, a publication of Minnesota Paralegal Association.

We love helping paralegals who want to take the next step in the legal profession. Learn more at mitchellhamline.edu/admission.

The Real Truth About Payday Loans and Secure Credit