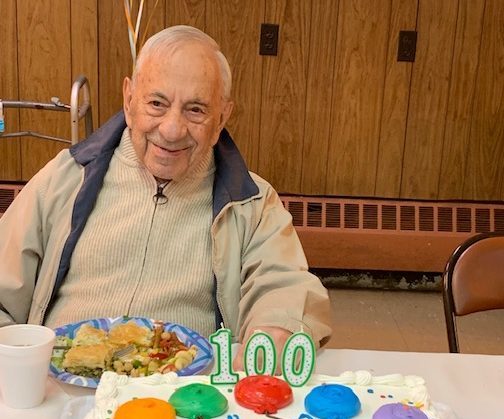 You would think that a community like Indian Orchard with its long history would have experienced almost every community possibility. The community was founded before the genocide by mostly single immigrants seeking to earn money and return to their homelands. St. Gregory Armenian Apostolic Church was founded in 1934 and has been the center of life for this small but vibrant community for decades. Last weekend the parish experienced an unprecedented and encouraging occasion. It was the birthday party of one of its most revered members—Armen Tachjian.

Tashjian, beloved by all as the community’s “visual historian,” was honored with a family reunion on Friday, March 25. The parish celebration took place on Sunday, March 27. A third celebration took place three days later at JGS Lifecare where Armen has resided for several years. The family event brought together relatives from the east coast, including his niece Sandy Kalvonjian and her husband Harry. Kalvonjian was kind enough to provide much of the family history for this article.

On Sunday, the parish offered a Lenten lunch for all as part of the centenary celebration. Armen still goes to church about once a month. The Sunday event included a collective group singing “Happy Birthday” and an opportunity to share greetings with dear Armen. A beautiful cake celebrating this incredible milestone was presented to Armen by the parish. Attending were members of the Surabian Clan of Worcester—Serpouhie, Margaret and Andrea—cousins ​​of Armen on his mother Anna’s side. Der Bedros Shetilian and the board are to be commended for this fine example of Armenian Christian love.

Over the past few decades, it has been nearly impossible to see Armen without his photographic equipment as he has literally documented every event at the church for the past 70 years. His home has been the repository of 8mm and 16mm film, slides and stills that have captured the history of this bustling community. Many families have also used Armen’s talents for family portraits taken at home in a studio environment or with the beautiful flower garden maintained annually by his dear wife Shirley. Professionally, Armen was a successful industrial photographer who produced material for sales catalogs and trade promotions for companies such as Milton Bradley and Westinghouse.

Tashjian was born in Springfield, MA on March 29, 1922 as the eldest of three children to Eghishe and Anna Tashjian. Her father ran a candy store in the town of Springfield. Her parents are universally recognized as humble, loving and dedicated servants to the church and community. Armen bore many of their behavioral traits. He graduated from Tech High School and started working as a precision tool maker. After several postponements, Armen joined the Army Air Corps and served his country from 1943 until the end of the war. After the war ended, with the help of GI Bill, he earned a Bachelor of Fine Arts in Photography from the Art Center College of Design in Pasadena, California. While working for Westinghouse he met his wife Shirley. They were married for 57 years until her death in 2015. Shirley embraced the Indian Orchard community as a Sunday School teacher and member of the Ladies Guild; the community loved him. Armen has always enjoyed playing the piano and was organist at St. Gregory until a few years ago.

Armen comes from a close and devoted Armenian family. Her brother Haig, also a World War II veteran and IBM retiree, is 97 and lives in California. During a recent conversation with his daughter, Haig commented on a Facetime call: “God blessed us. We wouldn’t have been here without our strong and determined 4’10” power of a mother who survived the atrocities and hardships of genocide. I love you Armen. May God bless you now and always. His loving sister Nancy Sellarole, almost 92, was a successful realtor in New Jersey and now resides in Delaware. Nancy summed up her older brother beautifully, saying, “Armen is a sweet soul…one of the good guys.” The siblings connect on video calls as often as possible and end each call with a hello and a kiss. Armen has four nieces and nephews: Sandy Tashjian Kalvonjian and her husband Harry; Bruce Tashjian and his wife Beryl; Bonnie Sellarole Inserra; and Theodore Sellarole and his wife Tammy. He also has eight great-nieces/nephews and eight great-great-nieces/nephews.

The community’s love for Armen stems from a lifetime of selfless devotion to others and a sweet humility worthy of admiration. Armen has a sense of calm that stabilizes those around him. Parishioners of my generation will remember that Armen entertained the children at the annual parish meeting with cartoons and short films so that the parents could participate in the affairs of the church. He took pictures of everything in the community and then discreetly offered copies to individuals. When the original church burned down in 1966, Armen was the on-site photographer who captured the construction of the new church dedicated in 1968. A skilled and dedicated member of the community, he documented every phase of the new building for posterity. . Almost everyone has a photo of Armen from his children in the Christmas program or serving on the altar. His intention has always been to serve others. I worked with Armen on a church anniversary committee several years ago; he took a photo of the cross on the dome of the church with the sun perfectly aligned, creating a sunburst effect. It was a photo that only someone with the “eye” could take. It was my favorite. A few years later, when we left the Orchard community, we were given a framed version of this photo. I cherish it to this day. As the unofficial repository of all visual documentation, Armen always made his home available to search for a piece of history for special events. His patience and endless interest are remarkable. Most of us look at a family album, and it inspires sentimental discussions. Armen’s lifelong work in the parish has been to create the “community album” from which thousands of discussions are permitted. The parish recently created a permanent committee to organize this 75-year-old portfolio and eventually digitize them in perpetuity. It’s a way of honoring Armen’s incredible contribution. It will be preserved.

Birthday celebrations are common every year for children. As we age, the frequency of these celebrations may decrease, but as we enter old age, they become an occasion to admire, honor, and cherish the wisdom and contributions of individuals. This is the case of someone like Armen Tashjian. The emotion on the faces of those present expressed the honor they felt to witness such an occasion. May God bless Armen on his 100th birthday, and may the Lord continue to grant him good health.

Stepan grew up in the Armenian community of Indian Orchard, MA at St. Gregory Parish. A former member of the central executive of the AYF and the executive council of the Eastern Prelature, he also served many years as a delegate to the Eastern Diocesan Assembly. Currently, he is a member of the board and executive committee of the National Association for Armenian Studies and Research (NAASR). He also sits on the board of the Armenian Heritage Foundation. Stepan is a retired computer storage industry executive and resides in the Boston area with his wife Susan. He spent many years as a volunteer teacher of Armenian history and contemporary issues to young generation and adults in schools, camps and churches. His interests include the Armenian Diaspora, Armenia, sports and reading.

Canceled bank loans rise due to ‘reluctance’ to take over