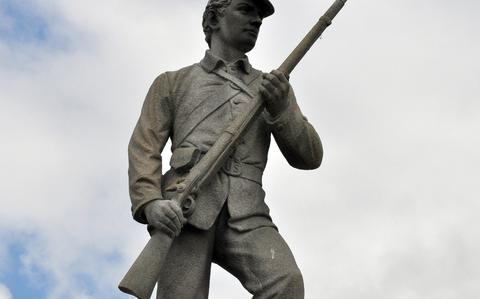 WILLIAMSBURG, Virginia – The National Park Service announced Tuesday that it has awarded the largest grant in the history of its U.S. battlefield protection program to help preserve one of the lesser-known battlefields in the Civil War.

The $ 4.6 million grant will be used to purchase and preserve 250 acres of the Williamsburg Battlefield in York County, Va., Which is on private land outside of the city and the former colonial capital.

The battle was part of what is known as the Peninsula Campaign of 1862, when Union forces attempted to capture Richmond from the southeast.

The fighting began after American slaves provided essential intelligence to the Union Army on the unoccupied Confederate entrenchments. There were 72,000 troops engaged in the battle, which ended with 3,800 killed, wounded or captured, said Jim Campi, policy and communications manager for the American Battlefield Trust.

The nonprofit is partnering with the Virginia Departments of Conservation and Recreation and Historic Resources to preserve the battlefield.

“It took place in the mud and the rain – it was a messy fight,” Campi said.

Campi added that the peninsula campaign was an opportunity for Union forces to “catch and swallow a considerable amount of the retreating Confederate army.”

“It was important that the Confederates were finally able to retain the Union Army at Williamsburg and continue their retreat to Richmond,” Campi said. “If (the Confederates) had not succeeded in doing so, the war would have been considerably shortened.”

From the 1690s to the mid-1800s, a series of landowners exploited the land as a plantation that used the labor of American slaves. In its press release, the National Park Service said archaeological investigations “will broaden and enrich our understanding of the people – slaves and free – who worked hard on this land.”

“It’s one of those sites that has really just been forgotten,” Campi said. “But it certainly played an important role in preventing the Union’s capture of Richmond in 1862. And there are some fascinating stories to it.”

A statue of a Union soldier stands as a monument to the soldiers of the 128th Pennsylvania Volunteers at Antietam Battlefield National Park. Unit member Ignatz Gresser was among 20 Union soldiers honored Saturday for receiving the Medal of Honor at Antietam, the bloodiest one-day battle in US history. ()